"One election does not democracy make" 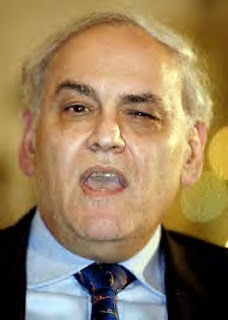 These were the words of Richard Perle, quondam US Assistant Secretary of Defense, quondam Chairman of the Defense Policy Board, present day Resident Fellow at the American Enterprise Institute, well-known commentator and thorn in the cleverdicks’ flesh and, in my experience, the only man in the whole world who accepts the title “Neo-con”.

I would go further than that and say that elections in general do not a democracy make. There were elections in the Soviet Union and its colonies but neither that nor the grand title of people’s democracies made them into real democracies. Mutatis mutandis, that applies to other countries – democracies are more than just elections, let alone just one election.

Perle was addressing a large audience (it is not easy to fill the Finchley Synagogue, believe me, but he did it) on the subject of Annapolis and whether the Middle East was ready for peace. His prognosis was not a happy one. In fact, the entire talk could have been very short.

Is the Middle East ready for ready for peace? No, of course not. But Mr Perle expanded on his theme.

One of the delightful aspects of events that have a Jewish aspect to it and, although this particular evening was part organized by the Henry Jackson Society, it had a very distinctive Jewish aspect, what with being held in a synagogue and all, is the emphasis on food. The audience was entreated several times throughout the formal proceedings not to leave afterwards but to sample the truly delicious food that had been prepared, especially the soup. They were right; it was all very delicious and the soup very welcome as the synagogue was cold.

Another aspect of meetings of this kind is less delightful – the ever-present and watchful security that is needed to pre-empt any possibility of an attack. To be fair to London and most of Britain, unless there is a big event going on, synagogues do not need police presence (in fact, even this time there was privately provided security). On the continent, in most countries police guard is almost permanent nowadays and certainly essential for happenings like Jewish weddings in big synagogues.

So what about the forthcoming Annapolis Summit, Condoleezza Rice’s final attempt to recover her credibility as Secretary of State (her predecessor never managed it and neither did most Secretaries of State in recent decades)?

Almost none of the players, according to Richard Perle want stable and reliable peace in the area because they do not want the existence of an Israeli state. That has been the stumbling block for more than sixty years and will continue to be so. When an Arab leader decides to go against that mind-set, as Anwar Sadat did, he is assassinated.

To go through the players: Iran and her client organizations are unlikely to want peace; Syria, who has signified an intention to attend, is nevertheless unlikely to stop supporting Hezbollah or meddling in Lebanese politics or attacking Israel through her proxies; Saudi Arabia and the other Gulf states may talk peace but they continue to subsidize vicious anti-Semitic, anti-Israeli, anti-Western propaganda in their own countries and elsewhere, opposing terrorism on their own soil but promoting it elsewhere.

The timing is not very auspicious either, as we watch the vicious struggle between Hamas and Fatah continuing mostly in Gaza but also on the West Bank. Sadly, neither Mr Perle nor any of the questioners, some of whom talked of the two-state solution, mentioned the fact that we are really looking at a three-state solution.

The one bright aspect of the overall situation is the situation in Iraq, which is improving steadily (though you might not think so if you relied on the British MSM for information) as Iraqis of different hue realize that whatever they feel about other Iraqis, their overall interests are not allied with al-Qaeda. (I suspect Basra is an exception but that is a different and painful tale.).

We see this in greater participation by Iraqi forces in the surge, the great reduction in attacks and the growing willingness by ordinary Iraqis to hand over terrorists or potential terrorists of whatever kind to the authorities.

Here we came to the main issue, one that we have covered on the blog a few times and on which we agree with Richard Perle. The problem between Israelis and Palestinians goes beyond the diplomatic discussions that are likely to take place at Annapolis. It is not about land or the number of people who might or might not be allowed to “return”. (By the way, nobody is asking this but are we to assume that if right of return becomes part of the deal, the 800,000 Jews who were forced out of the Arab countries where they had lived for a couple of millennia and their descendants will be allowed to return and their land and property will be restored to them? No? Really?)

The real problem goes further into the psyche of the Palestinians and many of their Arab supporters (though none of the latter are prepared to fight for them, which is just as well). We need to look at the indoctrination that is carried out in Gaza, in the West Bank and in many of the Arab states; the songs of hatred children are taught to sing; the miniature suicide bombers’ vests that they are given.

These are the issues that the negotiators at Annapolis must address but will they? On past performance, one would say that is unlikely. So the answer to the question, is the Middle East ready for peace, has to be no, not for a long time.

I need to mention one or two other subjects that came in the talk or during questions. Mr Perle talked about the global aspect of al-Qaeda, which is often a short-hand for Islamist terrorist organizations. In particular, he mentioned the case of Khalid Sheikh Mohammed, the murderer of Danny Pearl.

Khalid Sheikh Mohammed is British, the son of a wealthy British-Pakistani family, who went to the LSE and was set for a career in this country. While at the LSE he saw a film about the siege of Sarajevo. I am glad to say that Richard Perle sounded as outraged about the way Europe had left the Bosnians to their fate, as we feel on this blog. Apart from the wrongness of what was going on in the former Yugoslavia (the biggest war on the European continent since 1945 and most of it took place after the Maastricht Treaty had been signed sealed and delivered) it was inevitable that we would at some point pay for our stupidity. We are paying for it now while Dame Pauline Neville Jones, one of the architects of that foolish policy is advising the Conservative Party on how to deal with the outcome.

Khalid Sheikh Mohammed then went on a humanitarian mission to Bosnia where he was fingered by an imam and sent to train in Afghanistan with the promise that an imam in Britain will square his family whose approval was needed. The rest is history of a particularly grisly kind.

I was particularly pleased that there was a representative of the Iraqi embassy in the audience who stood up and thanked the Americans and the coalition partners for liberating Iraq but wanted to know sharpish if we were going to abandon his country to the Iranians.

The other fascinating contribution came from an Iranian, who quite clearly lives in Britain and who spoke about the Iranian opposition to President Ahmadinejad and the Mad Mullahs (he didn’t call them that), their courage and the need for Western support. He also mentioned the appeasement practised by European governments and, particularly, the Foreign Office and diplomats of other countries. The less said about that the better. We are not proud of our diplomats and neither are Americans I have spoken to proud of theirs.

So, when will the Middle East be ready for peace? As Richard Perle said, when the Palestinians elect people who have their best interests at heart. We have a long way to go and it is not going to be pleasant.