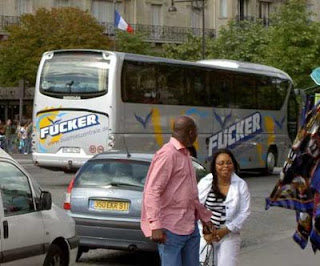 Coaches like this will soon be a thing of the past, if the EU has its way – and we are not referring to the rather unfortunate name of the operator. By 2010, all European registered trucks and tourist coaches will have to be fitted with a system called Electronic Stability Control (ESC).

This system is claimed to help drivers maintain control of their vehicle in critical situations and the commission suggests that equipping coaches and truck could ultimately save over 500 deaths and 2500 serious injuries per year in the European Union.

Wikipedia seems to think that this is a good idea - somewhat in contrast to our views on the previous commission road safety initiative – but what is particularly interesting from this blog's perspective is how this new law comes about.

The commission press release itself gives that clue, as it tells us that it arises from an agreement made at a United Nations meeting in Geneva. This requires heavy vehicles approved by the United Nations Economic Commission for Europe braking Regulation (Regulation 13) to be fitted with an ESC system meeting an agreed specification. And this, the commission adds, "allows the EU to make ESC a mandatory requirement by reference to this Regulation."

In other words, the EU is not the originator of this law – it has been agreed at intergovernmental level by the members of UNECE. This, once again is our old friend the "dual international quasi-legislation/comitology mechanism", where nation states make the agreements at regional or global level and the commission simply acts as the "middle man", turning them into legislative instruments.

Arcane this might be but, as we explained recently, this is a vitally important counter to the oft-quoted canard used by the Europhiliacs. They would have it that, if we left the EU, we would still have many our technical laws made in Brussels. Without a seat at the table though, we would have no control over the process and simply have them handed down "via the fax machine", as is claimed to be the case with Norway.

But, as this episode illustrates, the law has been agreed long before it gets to Brussels – this one in Geneva - by the UNECE committee, of which the UK is a member and would remain, whatever our arrangements with the EU. In this case, therefore, the real boss in UNECE, not the EU.

So it is that the coach shown may not actually be showing the operator's name, but passing a comment on the Europhiliacs who pretend that we have a lot less control over our own destiny than is actually the case.