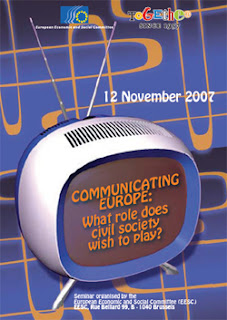 Whatever view of the European Union the public at large might have, the "colleagues" do take themselves very seriously, and are continuing to target "civil society" in their efforts to "improve communication on Europe".

The latest initiative is yet another meeting in Brussels, this one hosted by the European Economic and Social Committee (EESC).

And once again, the same formula is being used, the target for this extravaganza being "around 150 communication professionals and members of national economic and social councils and civil society organisations" who were assembled to "set up a framework for discussion and action to improve communication on Europe."

It was then down to Jillian van Turnhout, EESC vice-president responsible for communication, to set the scene. This initiative, she said, aimed to establish a network of "ambassadors" in the member states and – resorting to the deadening jargon of the European élites, "to reinforce compatibilities and synergies so as to provide the public with access to better information on Community policies."

Thus she came to the "civil society organisations", and you might think that these have their own specific agendas. The Friends of the Earth, for instance, are slightly known for their concern about the "environment". The Royal Society for the Protection of Birds, to name one other such organisation, has – or so it claims – a passing interest in birds. And so on.

However, according to Jillian van Turnhout, they are also, "ready, willing and able to talk to citizens in their own language and explain to them how Europe influences their daily lives in a positive way". That is, presumably, as long as the commission is prepared to continue bribing them.

The urgency of the task is then underlined because, says Turnhout, civil society is "fundamental to communicate the new Treaty of Lisbon." So, if Purple Scorpion really needs to know how many vetoes are being surrendered in the Lisbon treaty, he should perhaps be asking the RSPB.

The civil society theme was then echoed by Claus Sørensen, director-general of the EU commission's Directorate-General for Communication – the Fragrant One's mob. This time, we hear that phrase again: "participatory democracy". Political stakeholders – i.e., elected politicians – are one thing, says Sørensen. But "civil society actors" (is he thinking of drama societies?) "have separate but complementary roles in communicating Europe". Civil society organisations, he tells us, "play a vital part at national level in the drafting, relaying and interpreting of current EU affairs."

"After all," he stresses, "the members of voluntary associations in the EU are, quite simply, European citizens. They are Europe: so it's essential that they discuss European issues together. That is, at bottom, what 'communicating Europe' means."

So it was that the participants of this wonderful meeting toddled off to "discuss issues such as how to improve communication on Europe; how the European institutions can further enhance European intervention and the methods they can use to reach out to the European public."

Therein lies the real agenda: "how the European institutions can further enhance European intervention". The talk and the jargon may come over as slightly comic, and the meeting was in a foreign country, a long way away, about which we know little. But these people are deadly serious and the amount of time, effort and (our) treasure they are expending on "civil society" does suggest they believe they are on to something.

How long will it take before they have their own "fifth column", using the very fabric of our own society, all dedicated to promoting European political integration?