The "terror" of it all 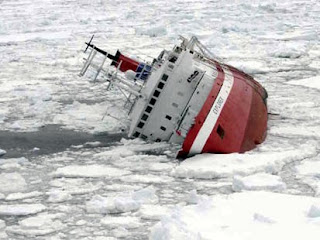 If I could be bothered, I would actually go away and count the number of headlines – of the 3,000 or so recorded by Google News which include the word "terror" in describing the accounts of survivors from the MS Explorer, which sank in Antarctic waters.

Typical of the genre is The Dorset Echo (although any number of national papers are just as guilty). This proclaims, "My terror as cruise ship sank", telling of Mic Simpson, 70, who says he was woken by a "sharp metal tearing sound" as he lay in bed on the ship.

Cut to The Daily Telegraph, which offers the accounts of Gillian and Brian Lee, from Telford. They …

… told how they spent their final minutes aboard the Explorer piling on extra clothing. "You see it in books and on films," Mr Lee said. "We realised it wasn't a drill, it was serious. We had two or three minutes, enough time to put our cold weather gear on. "People were very calm and collected. There was a bit of light-hearted banter, occasional jokes and references to the Titanic."

So much for the "terror", which seems only to have existed in the minds of the copywriters and the subs who cut and pasted the headlines from the agency reports.

With such egregious examples, however, it is very easy to discern the truth – not least from watching the calm demeanour of survivors on television news, so it says a great deal about newspaper editors and the industry as a whole that they can deliver this sort of tosh, without so much as a blush, knowing it must be untrue.

The problem comes when issues are more complex, and the truth is not so easily verifiable, or there are nuances which are quite beyond the skills of copywriters to convey. Then the headlines may all read the same, such us with the current defence "crisis", global warming and even European Union issues, but that does not make them any more true.

Nevertheless, while so many people tell us blithely that they never believe anything they read in the newspapers, the fact is that they do. When all the headlines are telling the same story, the view is that they can’t all be wrong – even if the story originates from a single agency report and has been "cut and pasted" a thousand times into diverse publications.

And, when a report reinforces pre-existing prejudices, too many people believe it, not for its inherent accuracy (which may not exist) but because they want it to be true. Thus, the response to newspaper reports is so often not a matter of rationality, assessing a story on its merits, but part of a belief system.

That, unfortunately, is part of the human condition and the only solace one can draw from it is the knowledge, as my colleague Booker so often tells me – citing any number of authorities – that whatever is held to be correct by the ruling orthodoxy is invariably wrong.

Welcome to the real world!