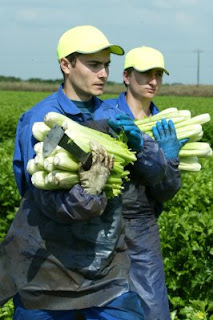 The Observer picks up on the latest developments in the situation in Italy - not a happy picture, where there has been a vicious attack on Romanians by masked Italians.

Over in the Independent on Sunday we get a picture of the effect of mass immigration on the Lincolnshire town of Boston. Again it is not a happy picture – a town no longer at ease with itself.

Meanwhile, The Times takes up the issue of the number of immigrant workers in the UK, offering revised statistics which suggest that not 52 percent but more than 80 percent of the jobs created in the past 10 years have gone to foreigners.

The figures also show that in the past five years the number of foreigners in work in Britain has risen by nearly one million, while employment among the UK-born population has dropped by almost 500,000.

In a leader that mirrors my co-editor's piece, however, the paper's leader notes that the willingness of employers to take on foreign labour is a reflection of our dire education system.

This has produced an "underclass", where a conservatively estimated 10 percent of young people are "Neets": not in education, employment or training.

"Faced with the choice between an unreliable, unskilled and unqualified British 17-year-old and an enthusiastic and skilled eastern European, probably speaking better English, whom would you employ?" the paper asks. We have created a "lost generation" of young people.

How the hell did we get into this mess?