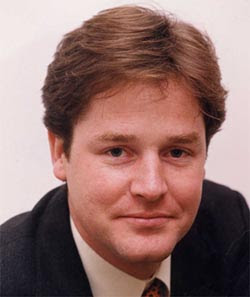 Nick Clegg, who – I believe – is something to do with the Lib-Dim party, has written for the Finanical Times, telling us how wonderful the European Union is. "In a previous career," he tells us:

… I spent many years negotiating on behalf of the EU with the Russian and Chinese governments on everything from Siberian overflight rights to the terms of China's accession to the World Trade Organisation. The fact that I represented the largest borderless market in the world gave me authority at the negotiating table that no negotiator from any single EU member state would have enjoyed on his or her own.

The same is true in countless other areas, from crime to migration, terrorism and aspects of foreign policy, where the potential benefits of acting collectively hugely outweigh the costs.

However, says the man:

None of this is to say the EU is not in need of reform. I have long campaigned for a more decentralised and accountable Union. Under my leadership, the Liberal Democrats will constantly scrutinise the EU for powers and policies that can better be exercised at lower levels…

Er? Haven't we just had a "reform" treaty? What was that all about then?

This is the trouble with these Eurofantasists. They always talk up what they think to be the good points, and (attempt to) pre-empt criticism of their beloved construct by agreeing that it needs "reform". But while the greater powers and controls flow upwards to Brussels, like Godot, the "reforms" never seem to arrive.