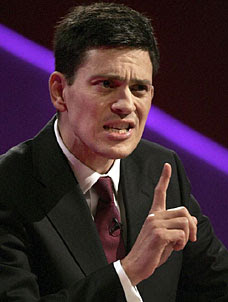 Not days ago this blog was reporting signs that the British government – and Gordon Brown in particular – was retreating from the idea of further British involvement in the European defence identity.

Now, in apparent contradiction of that thesis, up pops the egregious David Miliband, our Europhilic foreign secretary to argue that "Europe" should have its own army to tackle problems like Darfur.

This is in a speech delivered at the College of Bruges in Belgium, where Margaret Thatcher delivered her famous Bruges speech two decades ago where the foreign secretary offered his "vision" for the European Union for the next 20 years.

Contradicting even himself, Miliband insisted he was not proposing a Europe-wide superstate but then said the EU should be prepared to use the "hard power of "sanctions and troops to bring about change in places such as Darfur. Of course, since the very essence of a state is that it should have its own armed forces, what Miliband is proposing is a very real increment in the process of the EU developing the attributes of a state, whether "super" or not.

In full flow, Miliband went on to call for a review of the EU's defence capabilities "to set out," he says, "the challenge we face; and identify targets for the investment in equipment, research, development, and training necessary to make more of our armed forces".

The Daily Mail notes that the EU has a rapid reaction-force (not yet – this exists only on paper), but suggests that Miliband's "comments go much further and raise the prospect of a European army to rival that of Nato." Where, one wonders, has the newspaper been all this time?

Anyhow, this looks – on the face of it - very much like British interest in the European defence experiment is intensifying. However, this was a speech by the foreign secretary, not the defence secretary or the prime minister. Rather than a deliberate statement of UK policy, therefore, this is actually a declaration of FCO aspirations. The FCO may think these are one and the same things but, elsewhere in the political establishment, the enthusiasm is not entirely shared.

That is not to say that the "colleagues" are not serious about pulling the UK further into their mad experiment, but defence is one of those issues where plans on paper mean nothing without the means to deliver. And, while the FCO is good at producing paper, delivery lies in other hands.

What we might be seeing, therefore, is what might loosely be called "creative tension" between government departments. But the direction it is leading us is nevertheless disturbing, and there can be no confidence that the blandishments of the "colleagues" can be resisted as long as there are snakes in the grass like Miliband stalking the corridors of power.