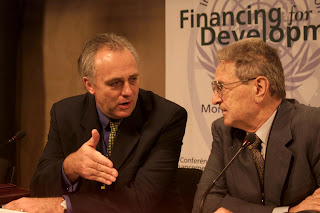 The Spectator has an interesting piece on our favourite Minister of State, Lord Malloch-Brown, former interference runner for SecGen Kofi Annan and former member of the “Soros axis of evil”, as the Wall Street Journal described it. At least, we hope he is former.

As it happens we have mentioned before that the man was going to get a grace-and-favour apartment on becoming a member of Gordon Brown’s government as well as pointing out that all this happened because the new Prime Minister has absolutely no idea of foreign policy or, indeed, where foreign is.

Still, it is very nice to have his lordship’s past career, relationship with George Soros, chief funder of the European Council on Foreign Relations, curiously enough, not mentioned in the Speccy article, as well as the expenses of his new residence laid out in a clear and easy to follow fashion.

The CV of Brown’s most senior outside appointment reads like that of a hair-shirted technocrat: a vice-president of World Bank, head of UNDP, chief of staff and then deputy secretary-general of the United Nations and now Minister for Africa, Asia and the UN. His entry in the Lords register of interests is spartan; he declares only his government salary, which is £81,504.

But Malloch Brown’s living arrangements in this country are exceedingly grand, and provided by the taxpayer. Only three members of the government have grace-and-favour residences in London. Malloch Brown is one of them, the other two are the Prime Minister and the Chancellor. David Miliband and his growing family have yet to use 1 Carlton Gardens, the Foreign Secretary’s London residence.

Yet Malloch Brown, astonishingly, has secured one of the three government flats in Admiralty House, where John Prescott used to live. In so doing, this newcomer has leapfrogged 20 full members of the Cabinet who notionally enjoy seniority over him. The oddness of the situation is compounded by the fact that the other two flats in the building are empty, and another government grace-and-favour residence in South Eaton Place, SW1, is being sold off. In response to The Spectator’s investigation Eric Pickles, a member of the shadow Cabinet, has laid down a series of parliamentary questions in an attempt to find out how much Malloch Brown’s living arrangements are costing the Foreign Office.

Malloch Brown’s return from abroad is given as the explanation for him receiving a grace-and-favour flat. Others hint that he secured it because he has four children under 16. If so, Ruth Kelly — with four pre-teen children — should surely have had first pick.

The Treasury’s National Assets Register values the Admiralty House accommodation at £7.76 million and as worth more than the flats above No. 10 and 11 Downing Street. It is, indeed, fit for a Lord, and one with tastes which are the opposite of frugal. A parliamentary answer earlier this autumn revealed that ‘the floor area of the ministerial residences in Admiralty House is 859 square metres.’ In 2006–07 the Deputy Prime Minister’s Office paid the Cabinet Office no less than £173,000 for John Prescott’s living in one of the flats there.

I guess housing in London is quite expensive but I do find it rather difficult to believe that the salary Lord Malloch-Brown is receiving together with expenses and very much together with the savings he must have made while inhabiting George Soros’s palatial residence for peppercorn rent cannot allow him to buy or rent a hovel somewhere in Westminster.

That brings us to the question as to why this man of dubious qualifications but impeccable tranzi background should have managed to negotiate quite such a good deal for himself.

There have been various theories advanced, not least the one about PM Gordon Brown wanting to ingratiate himself with the tranzi world and distance himself from the United States. That may be so (some evidence of the latter has been made clear recently as I shall explain) but we tend to agree with the authors of the Speccy article, one of whom is the estimable Claudia Rossett. Gordon Brown has no knowledge of or interest in foreign policy.

Meanwhile foreign affairs have been marching on. We discussed yesterday developments in Turkey and the fact that Prime Minister Erdogan has met President Bush to discuss various matters of importance to both sides.

The Los Angeles Times added to its report on the US-Turkish negotiations:

With his tete-a-tete with Erdogan, Bush began a week of diplomatic conferences focused on some of Washington's most important relationships. He will host French President Nicolas Sarkozy for dinner today and for official talks Wednesday. At the end of the week, German Chancellor Angela Merkel and her husband will stay with the president and Laura Bush at their home outside Crawford, Texas. 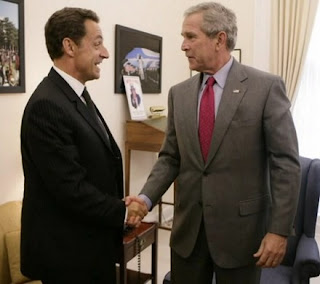 Where is David Miliband, come to think of it? We all sympathize with him adopting another child and wish the family well. But he does have an important job to do for which he gets paid rather handsomely by the taxpayer.

I must say I am rather disappointed by Miliband. The man seemed to start quite well but has fallen off recently. Must try harder.

So, what have we got out of the Sarkozy’s second visit to Washington DC (this time, one must assume without Mme S.)? Not a whole lot, according to the Daily Telegraph leader and one is inclined to agree with them.

He addressed Congress and talked much of Lafayette and Washington (old general L. does get trotted out by the French periodically, though it was, actually, the French navy that helped the Americans most), 1917, 1944, Marshall Plan, Berlin airlift (hmm, minimal French involvement in that). All jolly nice and very different from l’escroc Chirac, who had selective deafness when it came to hearing historical facts.

But on top of these familiar historical references, the French president lauded the "can-do" spirit of America, whether expressed through stars such as Elvis Presley or Marilyn Monroe or through the moon landing of 1969. America's moral value consisted in its "extraordinary ability to grant people another chance"; it was a country where "failure is never the last word", where nothing is owed but everything has to be earned.

Such verbal flourishes were, inevitably, somewhat punctured by Mr Sarkozy's analysis of current problems. He spoke of standing shoulder to shoulder in Afghanistan, without mentioning that French troops are not engaged in combat operations. He made no reference to Iraq. His determination to prevent Iran acquiring nuclear weapons did not envisage military action. And his belief that the way towards French re-integration into Nato's military command is through strengthening the European Union's defence capability failed to convince.

All of which is true. But, as the article grudgingly acknowledges, rhetoric does matter, though practical involvement would matter more. For all of that, given Britain’s gradual withdrawal in Basra as chronicled by my colleague in too many postings to refer to, a little bit of rhetoric on our own Prime Minister’s part would not come amiss.

Perhaps, a reminder that Britain and America do have a great deal in common historically and politically speaking, as well as many differences or a casual reference to the Anglosphere, whose other members also have much in common with this country could give us some idea that Gordon Brown does, indeed, know something about the world.

adly, it will be Chancellor Merkel who will be going to the US next, hoping, as the German journalists put it, to influence President Bush not to upset the Iranians or think about doing anything about their nuclear capability.

All of which brings me back to my first question: where, in all this, is the British Prime Minister.