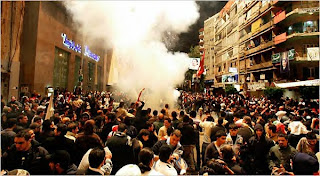 Oh come on, this has to be Israel’s fault. Or President Bush’s. I mean, it cannot be that another Middle Eastern country is going through yet another internal crisis and it is not America’s fault. That is just plain wrong.

Back in January this blog said (yes, I do get tired of repeating that):

We followed the ongoing fighting between the Lebanese army and Fatah Al-Islam and the continuing “involvement” by Syria in Lebanese affairs, not least through the obvious method of assassinating anyone who spoke up against it. Here is the long list of our postings.

So we are not altogether surprised that things have gone belly-up in that country. After a good deal of trouble and postponement of presidential elections the elastic snapped.

The parliamentary vote for a president was postponed again and the incumbent’s time has come to an end. As of midnight Lebanon has no president, a fact that people in Beirut find a matter for celebration. Or so the New York Times tells us in words and picture. The latter, in particular, have been erroneous before so we must reserve judgement.

Then again, it may be that they are particularly pleased to see the back of this president, as he was known to be pro-Syrian and reluctant to come to any agreement with the other side.

The departing president, Émile Lahoud asked the army to take charge of security and a caretaker government is taking care of day-to-day operations. According to “experts on Lebanese law” M Lahoud’s request changes nothing as the army has been in charge of security for some time. (Or not, as the case may be.)

The problem is that the Prime Minister, Fouad Siniora, is seen as being pro-Western or, at least, anti-Syrian, which means that he thinks that Lebanon should be run by Lebanese and not by Syrians. Somewhere deep down he probably thinks that Hezbollah, the only unofficial militia around that refused to disarm when the others did, is not a good thing for Lebanon either.

His opponents – given their behaviour, the New York Times stretches the point somewhat by calling them the opposition – is refusing to come to any agreement on who should be the next president.

Opposition members of Parliament said they hoped it would be easier to reach a deal on a new president after the Middle East peace conference scheduled to take place next week in Annapolis, Md.

Samir Franjieh, a lawmaker with the governing coalition, said that Syria was waiting to see if it would be asked to play a central role in the peace talks. If Damascus reached an understanding with Washington, he said, Syria might use its considerable influence in Lebanon to push for a settlement.

“The Syrians are taking their time,” Mr. Franjieh said.

Members of the governing coalition said that with the crisis coming to a climax, momentum at the negotiating table could shift in favor of the pro-Western bloc.

Meanwhile, where is the EU? Well, nowhere at the moment, though I have no doubt, Solana will start wringing his hands any minute. France, in view of her “special links” with the region has tried to intervene, as we find from Al-Jazeera’s report, which is considerably more somber than that of the New York Times and points out that the stand-off has been more or less permanent since “the Shia group” a. k. a. Hezbollah had pulled its five members out of the cabinet a year ago.

Bernard Kouchner, the French foreign minister, whose country has been leading efforts to resolve the crisis, left Beirut on Thursday after the latest in a series of failed mediation efforts.

As our readers might recall, Spain and Italy tried to intervene as well.

The foreign ministers of Italy and Spain had earlier voiced pessimism after a last-ditch attempt to get the rival sides to agree failed.

Another day, another failure for the soft power.
Posted by Helen at 22:01