The battle lines are drawn 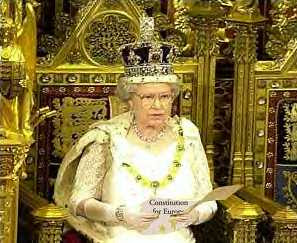 Entirely predictably, but nevertheless an important milestone in the passage of the EU Lisbon treaty from a draft to becoming part of the British constitution, the Queen's speech today, which was also entirely predictable, included provision for a Bill to ratify the treaty.

This drew a response from David Cameron that his Party would table an amendment to "give the British people the referendum they were promised".

So far so good, with the sides lining up – again very predicable, as indeed was the offering from Vincent Cable, the Lib-Dim spokesman. Says he:

The real issue and concern for the public is over the cumulative impact of repeated deepening and widening of the EU. No one under the age of 50 has had a proper say on our membership. We will seek to amend the Bill to provide for a referendum on our membership of the EU.

We can have as much legislative scrutiny as we like, but unless the public are persuaded that EU membership is in their interests British politics will continue to be poisoned by this issue. We want the Prime Minister to join us in making the case for Europe.

This may be the Trojan Horse, which the government buys into, in the hope of engendering "Tory splits". The rumours continue to abound that we will be confronted with such.

One thing for sure though, there are unlikely to be any significant Labour splits. Such a prospect was being heavily discounted by the BBC on the midday radio news, with the caution not to expect a "Labour Maastricht".

So, the battle lines are drawn and we hunker down for the next predictable stage – when the debates start in the New Year.