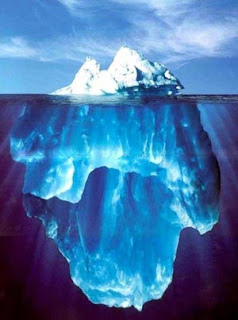 As a rule of thumb, a free-floating iceberg will show one tenth of its volume above the water, while nine-tenths remain submerged – hence the term "tip of the iceberg".

The analogy is often, quite appropriately applied to political activity as, with any system, most of the action is behind the scenes. The public (and media) only sees a fraction of what is going on. But, with the almost complete disappearance of commentary on the EU's Lisbon Treaty, however, we have what in nature is a physical impossibility – an iceberg that, for the moment, is completely submerged. We have, so to speak, a tipless iceberg.

However, Tory Diary, and latterly The Times, has picked up some of the sub-sea activity. Tory Diary reports on what the BBC's Nick Robinson believed heralded a slight shift in Tory policy on post-ratification tactics, articulated by Hague during yesterday's Queen's Speech debate on foreign policy.

Hague was asked (again) whether his party would promise a post-ratification referendum if the Tories were elected, which elicited a response from the shadow foreign secretary that, "We could not let matters rest there". In other words, the man sounded as if he was saying that the Tories would not accept that ratification by the Commons and by all other EU nations would put an end to the debate. They would insist, presumably, on either a post ratification referendum or, if that were not possible, a re-negotiation of Britain's membership of the EU.

Any change in policy, however, was quickly denied by "a spokesman for David Cameron", and there the matter would seem to lie. The iceberg having briefly showed its tip, has submerged again. But that does not mean that it is not there.

Senior Tories, it appears, are now admitting that – whatever else – the status quo, if a new Conservative government was elected, is not tenable. The solution, at the moment though, rests only on the vague premise that, in the event of an election victory, "something must be done".

Strictly speaking, therefore, there has been no change in policy but – as was hinted at in our earlier piece - there is a certain amount of realism creeping into the internal debate. The iceberg, therefore, fully submerged or not, definitely has the potential to sink the Titanic which is the Lisbon treaty.