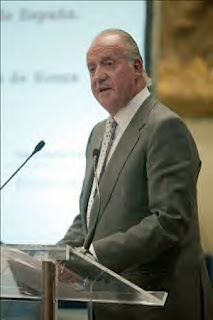 Well, it had to happen some time. Fidel Castro’s younger brother (in the revolutionary sense), Hugo Chávez was told to shut up by King Juan Carlos. Pity, somebody did not do it to Fidel Castro many moons ago.

Rick Moran alerts readers on American Thinker to a delightful piece of news.

At a summit of leaders from Latin America, Spain and Portugal (what on earth has happened to the common foreign policy?) Venezuelan President Chávez held forth as usual but, contrary to all expectation not all his listeners were asleep. The Spanish Prime Minister, Zapatero and the Spanish King, Juan Carlos managed to keep awake.

Chávez launched into an attack on the previous Spanish Prime Minister Aznar, calling him a fascist (not, perhaps, the most sensible thing to say in the presence of Spaniards, given the country’s complicated history), adding for good measure:

Fascists are not human. A snake is more human.

The man’s ability to argue would be laughed out of court in sixth form debating society. Why the left in the West likes him so much passes understanding? Could it be that they like really stupid-sounding thugs because that makes them feel superior?

Prime Minister Zapatero stood up to reply and explained that Aznar was not a fascist but had been the duly and freely elected Prime Minister of Spain. And he did not have to have the egregious ex-President Jimmah Carter certify the election as free and fair. And he had not shut down any TV stations or changed the constitution. Well, no, Zapatero did not say all those things but I expect he thought them.

Apparently, the gathered heads of state applauded Zapatero’s statement about Aznar having been the legitimate representative of the Spanish people while Chávez tried to interrupt him. Thoughtfully, someone had switched his mike off though everyone seemed to hear King Juan Carlos turn to him and suggest angrily that he “shut up”.

Chávez tried to reply later in the time ceded to him by his close ally, Nicaraguan President Daniel Ortega but the response was lame in the extreme. Would Fidel Castro have done better in similar circumstances?

The King is not alone. He was applauded back home by the people and the media, including that on the left, which he must have found pleasant after recent carping directed more at his family than himself.

At the same time Venezuelan officials and the media came out fighting (well, waving toy swords) and defending their President, reminding King Juan Carlos that they were no longer his subjects, a somewhat irrelevant comment but one that is frequently brought out by countries run by dictators even if Venezuela with all the recent “reforms” is only a dictatorship in the making.

For some reason Chávez himself is pretending he did not hear the comment. Selective deafness it is known as, but one wonders what he hopes to gain by downplaying the whole episode.