Brief news from the Anglosphere 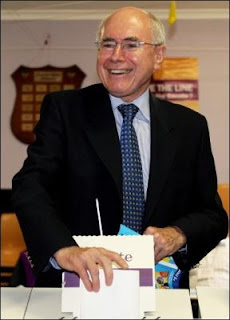 First the bad news: John Howard has not only lost the election but his seat as well. The Liberal Party, which has not been trounced quite the way our own Conservatives were in 1997, nevertheless, will have to do a little soul-searching.

Tim Montgomerie on Conservative Home knows the scene and has followed the campaign. His analysis is not at all pessimistic. Quite possibly we shall see fewer changes than are being predicted in a rather vague sort of way.

One problem will be the unions. Though Howard is routinely compared to Thatcher, so far as I know, he has not tamed them and the problems will resurface.

The new Prime Minister, Kevin Rudd, is a former diplomat and is, therefore, happy with tranzi-speak. Why else would he announce that climate change will be his top priority when everyone who followed the election campaign maintains that it was all about domestic issues? Having known a number of Aussies in my life, I would be quite interested in meeting the man who thinks he can stop them from driving or flying everywhere. Come to think of it, what does Mr Rudd do for transport and what did he do as a diplomat?

Still, not all is lost. The Australian Prime Minister may indicate that he is going to pay obeisance to the tranzis (and indication of intent is not the same as action); the Canadian Prime Minister remains robust.

Thanks to Don Surber's blog (another one I have not come across before - isn't life grand on the blogosphere?) we find out that Stephen Harper has managed to water down a Kyoto-backing resolution at the meeting of the Commonwealth Heads of Government in Uganda.

The story comes from the National Post, which explains:

Prime Minister Stephen Harper successfully pressed for the deletion of key wording in a climate change communique that would have specified that all members support a "binding commitment" on developed countries to reduce emissions by specific targets.

"Canada's view is we need binding targets on all nations," said Mr. Harper, who dismissed reports that other countries opposed Canada.

"When we discussed this among leaders I thought we came to a consensus very quickly," he said Saturday. "We found pretty good support for our position."

Britain, sadly, tried to bully the Canadians, forgetting that ... ahem ... it is an independent country these days.

Canada's Commonwealth partners -- Britain in particular -- were not happy with the Harper government's hard line. But it appeared that even after a bilateral meeting with Prime Minister Gordon Brown Saturday afternoon, Harper could not be persuaded to back down.

A Harper aide said Saturday that Mr. Harper pushed for a new paragraph of the Commonwealth's plan that specified that further negotiations on climate change should be done "individually and collectively" and "have respect for different national circumstances.

Since Canda won the day, isolated may not be the right word to use.