They are still alive 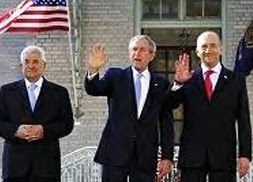 Two members of the North conspiracy for world domination were down in London and survived the trip, as far as I know. I had to extricate them from some ridiculous party in Belgravia and take them off to have a pizza near Victoria Station, confirming my view that the area around Victoria is a complete dump.

Still, it is left to me to put up something resembling a horlix and I can do no better than to turn to the event that is exciting everybody's attention outside our own little political pond, which is traumatized by the shocking news that politicians are dishonest and by the equally astounding notion that dogs have been known to bite men.

It is, however, time to look briefly at the Annapolis meeting, which is billed as the start of yet another Middle East peace drive. Undoubtedly the EU and all European politicians will applaud it but truth to tell, it is likely to go the way of all other Middle East agreements.

This is not just because Hamas was not present or because the Saudis have refused to shake hands with the Jews, i.e. the Israeli delgation, or because there need to be Israeli-Syrian negotiations, which presumably means that the Israelis should give up the Golan Heights and allow their villages to be pounded by the artillery again.

The truth was put very cogently today by Professor Bernard Lewis, one of the foremost experts in the world on the Middle East in the Wall Street Journal, by some oversight not on the web.

His summary was simple:

If the issue is about the size of Israel, then we have a straightforward border problem, like Alsace-Lorraine or Texas. That is to say, not easy, but possible to solve in the long run, and to live with in the meantime.

If, on the other hand, the issue is the existence of Israel, then clearly it is insoluble by negotiation. There is no compromise position between existing and not existing, and no conceivable government of Israel is going to negotiate on whether that country should or should not exist.

There can be no real progress towards peace until this basic point is settled among Arab leaders and Palestinian people as well as other Arabs. After all, when Egyptian President Sadat decided that the time had come to negotiate rather than subscribe to the myth that Israel will one day disappear, he was assassinated.

A good example of how this problem affects negotiation is the much-discussed refugee question. During the fighting in 1947-1948, about three-fourths of a million Arabs fled or were driven (both are true in different places) from Israel and found refuge in the neighboring Arab countries. In the same period and after, a slightly greater number of Jews fled or were driven from Arab countries, first from the Arab-controlled part of mandatory Palestine (where not a single Jew was permitted to remain), then from the Arab countries where they and their ancestors had lived for centuries, or in some places for millennia. Most Jewish refugees found their way to Israel.

What happened was thus, in effect, an exchange of populations not unlike that which took place in the Indian subcontinent in the previous year, when British India was split into India and Pakistan. Millions of refugees fled or were driven both ways -- Hindus and others from Pakistan to India, Muslims from India to Pakistan. Another example was Eastern Europe at the end of World War II, when the Soviets annexed a large piece of eastern Poland and compensated the Poles with a slice of eastern Germany. This too led to a massive refugee movement -- Poles fled or were driven from the Soviet Union into Poland, Germans fled or were driven from Poland into Germany.

The Poles and the Germans, the Hindus and the Muslims, the Jewish refugees from Arab lands, all were resettled in their new homes and accorded the normal rights of citizenship. More remarkably, this was done without international aid. The one exception was the Palestinian Arabs in neighboring Arab countries.

The government of Jordan granted Palestinian Arabs a form of citizenship, but kept them in refugee camps. In the other Arab countries, they were and remained stateless aliens without rights or opportunities, maintained by U.N. funding. Paradoxically, if a Palestinian fled to Britain or America, he was eligible for naturalization after five years, and his locally-born children were citizens by birth. If he went to Syria, Lebanon or Iraq, he and his descendants remained stateless, now entering the fourth or fifth generation.

The reason for this has been stated by various Arab spokesmen. It is the need to preserve the Palestinians as a separate entity until the time when they will return and reclaim the whole of Palestine; that is to say, all of the West Bank, the Gaza Strip and Israel. The demand for the "return" of the refugees, in other words, means the destruction of Israel. This is highly unlikely to be approved by any Israeli government.

There are signs of change in some Arab circles, of a willingness to accept Israel and even to see the possibility of a positive Israeli contribution to the public life of the region. But such opinions are only furtively expressed. Sometimes, those who dare to express them are jailed or worse. These opinions have as yet little or no impact on the leadership.

Which brings us back to the Annapolis summit. If the issue is not the size of Israel, but its existence, negotiations are foredoomed. And in light of the past record, it is clear that is and will remain the issue, until the Arab leadership either achieves or renounces its purpose -- to destroy Israel. Both seem equally unlikely for the time being.

It is too early to tell whether all those negotiations, meetings and discussions have gone anywhere near settling this issue.
Posted by Helen at 01:35