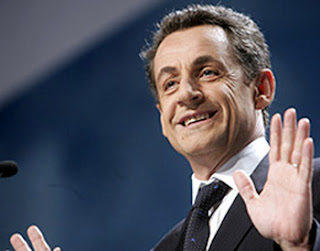 No, this is not a posting about John Howard. That is for tomorrow. The man I am talking about is President Nicolas Sarkozy who has been busy sort of staring down the transport strikers as well as those terribly well-meaning people who have been trying to sabotage French railways.

Sarkozy's method seems to have been keep a low profile but tell all and sundry (a somewhat difficult acrobatic feat) that there will be no surrender. They shall not pass.

According to the latest Reuters report, the strategy seems to have worked.

French President Nicolas Sarkozy pledged on Friday to press ahead with his economic reform plans after transport workers decided to end a nine-day strike that has been the toughest test yet of his presidency.

The number of trains on the national rail system and the Paris underground approached near-normal levels for the first time since the dispute started on November 13, although a full service was not expected until the weekend.

Wouldn't it be nice if London Underground approached near-normal Paris Metro levels just for one week? Dream on.

While Sarkozy is insisting that the main plank of his reform, pensions, will be kept intact, he seems to be ready to compromise on other matters.

Sarkozy has refused to back down on the main element of his reform -- ending early retirement rights for most of the workers who enjoy this privilege and index-linking their pensions to inflation rather than salaries.

However, he has indicated he is ready to make concessions in other areas, such as pay, and the French media have reported that an eventual deal might cost the SNCF railways alone 100 million euros ($150 million) a year in salary hikes and perks.

If the highly unpopular strike is called off or, at least, peters out, Sarkozy's stock will be very high, indeed.
Posted by Helen at 20:31