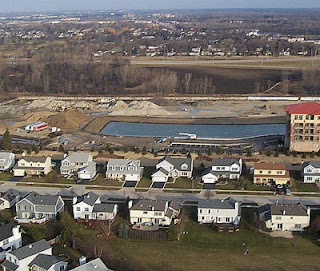 Immersed in our own affairs, and what appears to be the breakdown of our own government, it gets increasingly difficult to focus on the "bigger picture".

As we try to chart EU issues and write interesting and informed comment about the government-across-the-water, therefore, we are truly becoming a lone voice. Not only are the newspapers and media generally bereft of EU coverage, even the blogs have largely dried up.

With several "Google alerts" set up, watching what the bloggers write on the subject, we cannot recall such a vacuum of comment. Whole days have gone by when the only blog to appear in the lists is our own EU Referendum.

Yet, one of the issues which cries out for coverage is the ever-intensifying crisis in Darfur, which gets no better for being largely ignored, and the EU's abortive efforts to bring humanitarian aid, which are descending into farce.

We wrote about this last Friday, specifically about the shortage of helicopters that was holding up the deployment of EU forces, recording that the problem was to be solved on the Monday of this week. But, of course, as AP reports, it wasn't. The next deadline is for today, and after that …

On a political level, as well as humanitarian, this should be big news – politically because the EU is on trial and, when the chips are down, it cannot even deliver the pitifully limited resources needed to provide even the minimal aid promised. For a nation that is on the verge of having a new EU treaty foisted upon us – which gives the EU even more powers to devise spectacular failures - this should be of some interest. But other matters claim attention.

In one small corner of America, however, the EU's dereliction has not escaped attention. In the town of Wheeling, Illinois (pictured), the Intelligencer, which incorporates the Wheeling News-Register, reaches out to touch the very subject in which our media (and bloggers) are so uninterested. Headed, "Europeans Unable Or Unwilling to Help", the short comment reads thus:

The European Union was to have had 4,000 troops, about half of them French, on the ground in Darfur by now. But it hasn't happened - because the entire EU, supposedly one of the world's most powerful economies, allegedly hasn't been able to find a dozen helicopters needed for the peacekeeping force.

EU and African Union forces are part of a plan to protect civilians caught in the middle of a vicious civil war in the Darfur region of Sudan. But EU officials claim that they have not been able to find the equipment, including helicopters, needed for the force to function.

Frankly, we don't know whether to believe the EU leaders. We wonder whether they are merely having second thoughts about committing troops to a war zone where they may have to engage in combat.

One way or the other, however, the situation speaks volumes. It should be remembered by Americans, the next time Europeans insist that someone should do something about a humanitarian crisis.

There are two readers' comments appended, one of which declares:

There's the French-run European Union, putting it's money where it's mouth is, demonstrating all of the same will, and commitment (sic) that they so capably demonstrated in two World Wars. Viva la gutless!

Whether this is the authentic voice of "middle America" we cannot judge, but we suspect that this writer is not alone – and nor are our own views a million miles distant.

But hey! There are far more important things to write about, so we apologise to our readers for troubling them. We will try not to bother you with our lame trivia again.