Tribalism to the fore 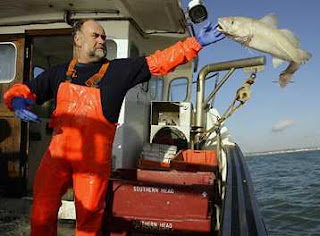 Having completely abandoned any pretence of carving out an effective fishing policy, all the Tories are now left with is to blame "the Government" for "neglecting the country's fishermen during a decade in power".

This is the lead story in a two-page spread in The Sunday Telegraph which has Bill Wiggins, the current Tory fisheries spokesman, accusing the Government of failing to manage the national quota responsibly. Thus he bleats about the "disgraceful waste" of discarding, and then pathetically calls for fishermen to be allowed to bring ashore the fish they caught "so we can work out what's out there".

But, if anything at all has lodged in the collective brain of this lethargic nation, it is the fact that it was a Conservative government, under Heath, that gave away our fisheries in the first place, and it was again a Conservative government which agreed to the disastrous quota system which set in train the long-term decline of our fishing industry.

If anyone needed any reminding of the dire role of successive Conservative governments, this is also there in the newspaper, as a Booker special who tells us at length how it is the quota system itself which is doing the damage.

That is reinforced by another piece which records the actual experience of fishermen, underlying the bankruptcy of a policy which is fundamentally flawed.

Yet, as we recorded recently, until David Cameron took over as the leader, the Conservative Party had the high ground on this issue, having been committed to a policy of repatriation of the CFP and the introduction of an effective management system which would restore the health of the industry.

But, shorn of that initiative, all Wiggin can do is focus on the Labour government's record, as if history only started in 1997, and nothing happened before that.

This sort of tribalism, however, is entirely unconvincing. If the Tories are to convey any sense that they are a party fit for government, they need to do more than simply to attack the government, ignoring their own record in the same policy area, while failing also to offer policies of their own.

All this lame tactic does is invite snorts of derision and adds to the growing conviction that, even after ten years in opposition, the Tories have learnt nothing from the experience.