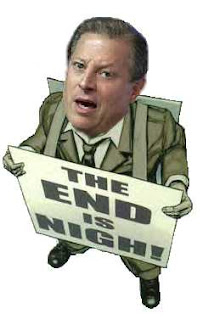 It would actually be quite funny if it was not so serious – but from the sad little man in a dirty raincoat trudging the streets with a sandwich board proclaiming, "The End is Nigh!", doom-mongering has been elevated to the status of high policy.

Thus do we have a torrent of coverage of the latest IPCC report, which starts with the apocalyptic words, "Warming of the climate system is unequivocal…" and goes on to proclaim in doom-laden terms, that, "Anthropogenic warming could lead to some impacts that are abrupt or irreversible …". And, although qualified by the caveat that this depends "…upon the rate and magnitude of the climate change," this has in many instances been picked up as the lead headline by an uncritical media, focusing on the word "irreversible".

In fact, though, the IPCC offers absolutely nothing new, nothing that has not been trawled over a thousand times and nothing that indicates anything other than the simple fact that, by offering highly selective and in many cases highly dubious statistics, you can "prove" just about anything you want.

Thus does the IPCC tell us that, "Eleven of the last twelve years (1995-2006) rank among the twelve warmest years in the instrumental record of global surface temperature (since 1850)," completely ignoring the fact that, even in the 20th Century, it has been warmer.

As we pointed out, in August, James Hansen of the Goddard Institute for Space Studies was forced to revise his long-influential record of US surface temperatures, showing that the past decade has seen the hottest years on record. His graph now concedes that the hottest year of the 20th century was not 1998 but 1934, and that four of the ten warmest years in the past 100 were not in the present decade but in the 1930s.

So, compare and contrast:

Eleven of the last twelve years (1995-2006) rank among the twelve warmest years in the instrumental record of global surface temperature (since 1850)...

Which is true? Well, the latter is the truth, but that is of no interest to the IPCC, which is concerned only with pushing its agenda.

The trouble is that – as with any scare – the naysayers have the initiative. Having suborned the official bodies, and ruthlessly suppressed dissidents, they can swamp the media with their message, which will then remain the prevailing orthodoxy. Deconstructing the IPCC report will take time and effort for a small band of largely unpaid volunteers, with limited access to the media – their message drifting out over time, with only a fraction of the coverage that the doom mongers get.

This is very much part of the scare dynamic, which I first experienced directly in 1988-89 when I was personally involved in then the fashionable scare of the moment – salmonella and eggs.

You would wake up to see the scare headlines of the morning, talk with colleagues about them, start trying to find the source of the lurid claims and then set to work on showing they were absolutely groundless. But, by the time that process was complete, several days had passed, the story had moved on and the media did not want to know.

So it is with global warming. The media drops its "bombshells" like well-formed turds on the pavement and then moves on, leaving others to clear up the mess behind them. Decades down the line, when the world doesn't come to an end, when the fears and the alarms prove groundless, there will be another scare in the making – or several more – and no one will want to know.

In the meantime, billions will be wasted by the growing climate change scare industry, and we will be paying through the nose for their self-indulgence for years to come. That is the measure of the scare, and that is what this "climate change" nonsense is – an exercise in collective self-indulgence.