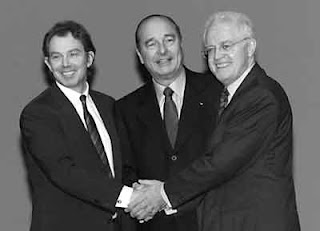 Until the volume of posting became so high as risk overwhelming this site, prompting us to start up our sister blog Defence of the Realm, defence issues were a central feature of our postings.

What originally brought us into the fray, way back in 2004, was growing evidence of a Europeanisation of defence policy, a trend which emerged from the 1998 St. Malo agreement between Tony Blair and Jacques Chirac which led, the following year, to a further agreement to set up a European Rapid Reaction Force (ERRF).

Since then, defence policy has been dominated by the need to build this so-called "expeditionary" force, to the detriment of the other commitments imposed on our Armed Forces, to the extent that it is largely responsible for the "overstretch" and apparent underspending which blights current operations.

Now – perhaps unwittingly – the Left wing think tank Demos has published a serious report which challenges the whole basis of the “expeditionary warfare” on which the ERRF depends, thereby undermining what was a key part of the Blair legacy, developed in the early days of his tenure as prime minister, in the first flush of his Euro-enthusiasm.

We take a look at that report over on Defence of the Realm.