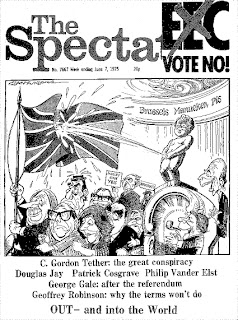 We are going through another period of fussing about referendums and it seems to me that I should try to weigh in on this subject. What with one thing and another, I have written and spoken about referendum – need for one and justification for it in a supposedly functioning representative democracy a few times.

In the previous posting I link to above I outlined my opinions as to why referendums are not un-British (many things are un-British until they are done in Britain when, lo and behold, they become British) and why at present, it is the only way to exert some control over the elected dictatorship we have instead of a democracy, though, of course, it is controlled by the unelected dictatorship in Brussels. (No, boys and girls, it is not totalitarian or even authoritarian. But it is undoubtedly a dictatorship. Many things are.)

Moving right along there, the question arises of what it is we should have a referendum on and, at present, the most pressing issue is the Constitutional Reform Lisbon Treaty.

There seems to be a widespread effort to avoid having a referendum on the subject even if it means having one on something else. On Thursday I wrote of Anders Fogh Rasmussen, the newly re-elected Danish Prime Minister (a man, incidentally, with many admirable qualities) talking about holding another referendum on whether Denmark should join the euro some time in the next four years.

He has also suggested that possibly at the same time, possibly separately, there should be referendums on all those opt-outs that persuaded the Danes to vote the Treaty of Maastricht through the second time round.

For some reason, Open Europe in its daily press summary showed itself to be delighted with Mr Rasmussen’s comments, on the grounds that any referendum is better than no referendum.

Which brings me, very neatly, the subject that seemed to convulse the blogosphere yesterday: should we have an in or out referendum instead of one on the Constitutional Reform Lisbon Treaty.

This was first proposed by the then leader of the Lib-Dims, the undoubted europhiliac Sir Menzies Campbell and has since been taken up by various luminaries, all on the other side of the debate. Yesterday it was suggested in his column by Iain Dale, who is not a europhiliac but a reasonably mild eurosceptic, which means he does not go as far as I do in his views on the subject.

His argument, as far as I can make out is that an idea of this kind would smoke out UKIPers and strengthen the Conservative Party. Tim Montgomerie, also a mildly eurosceptic Tory, disagrees with him on ToryBoy blog. According to him, the last thing the Conservative Party needs now is another split on “Europe”.

Our readers may be surprised to hear this but I do not really care whether the Conservative Party goes through any more convulsions on “Europe” or not. Neither am I too impressed by their obsession with UKIP. If the Conservatives had spent as much time attacking the government in the last couple of elections as they did blackguarding UKIP, they would have done considerably better.

From a eurosceptic point of view, I cut my teeth on the Maastricht Treaty and the debates around it. Therefore, I assume that the default position of the Conservative Party on the subject will be one I shall probably dislike. Can’t say fairer than that.

My colleague tells us that there are serious discussions going on in the party on the subject and a reasonable position may well be arrived at soonish. I don’t know about those discussions but I am assuming that as in education or tax and welfare reform, so in the European question – in the end the Tories will be too scared to do anything but waffle.

Where does that leave us with the in/out referendum? The instinctive argument is that we should avoid that like the plague and stick to demanding a referendum on the Constitutional Reform Lisbon Treaty.

Ruth Lea, Director of Global Vision, spent a good deal of time emphasizing that at the Bruges Group conference a week ago. She also insisted that she was different from withdrawalists as she wanted to have a trading agreement with “Europe”. I have yet to meet a sane withdrawalist (I have, as it happens, met a large number of completely insane ones but they do not really count) who does not want to have trading agreements with European countries. It is not an either/or argument and I do find it a little annoying that I once again have to listen to arguments I thought were over and done with 15 years ago.

On the whole, I suspect that the suggestion of an in/out referendum will not be repeated by Gordon Brown or any Labour politician of standing. At one point it looked like Keith Vaz was being used to fly a kite. But our Gordon is not a risk-taker and a referendum on Britain’s membership of the EU would be an enormous risk.

It is not at all certain that the figures will pan out in favour of the europhiliacs. It is a risk for both sides but I do think it is a bigger one for the government and an absolutely enormous one for the Conservative Party, which is why I suspect there will be no serious suggestions from the leadership on either side of the House to hold an in/out referendum.