Could someone interpret this, please? 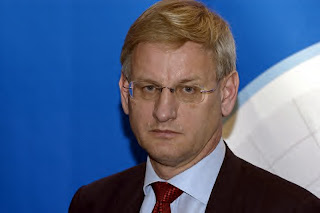 I don’t mean literally interpret, since one of our kind readers has already done so but the meaning of what the egregious Carl Bildt said would be quite useful.

The egregious Mr Bildt is the Swedish Foreign Minister, described by our reader as the flying foreign minister. We all accept that foreign ministers in this day and age have to do a certain amount of travelling (though why we continue to keep excessively large diplomatic corps as well is beyond my understanding) but Carl Bildt has surpassed most of them.

The trouble is that he also sees himself as a transnational statesman and feels the need to pop up in various places where the international media might be in search of a story. What, I ask myself, of his carbon footprint?

His latest trip was not very far from his home, merely to Oslo to the meeting of the Nordic Council – a delightful idea and one rather wishes it had more power than it, presumably, does.

On the way in to the House of Literature, where the Council was meeting, Mr Bildt was accosted by the people as represented by demonstrators, who demanded that Sweden have a referendum on the Constitutional Referendum Lisbon Treaty. There is a sequence of pictures of Mr Bildt’s trip here.

The second one shows him arguing with some demonstrators and, according to this account [in Swedish], translated by our reader, the exchange went something like this:

The demonstrators shouted some of what is on their posters and demanded to know why Swedes cannot have a vote on the Constitutional Reform Lisbon Treaty. (It is events like this that make one realize that certain historical and geographical loyalties cannot be destroyed by the blessed European Union. Not that there are no wars in Scandinavian history. Far from it. Plenty of wars and plenty of conquests but also a great deal of fellow-feeling.)

Mr Bildt turned round, as the picture shows quite clearly, and said: “Why don't you enter the EU, then you will see if you yourselves will get to vote on the treaty.”

Mr Bildt refers to the episode on his blog with a link to the article but no mention of being misquoted or taken out of context. He clearly agrees with the account. Whatever could he have meant by those words?