Rebellion in the ranks 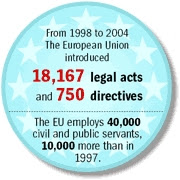 Well, not quite the ranks but in the columns of Der Spiegel, which has a long article about the absurdity of the well-meaning regulations from the EU, which according to Hans-Jürgen Schlamp and Markus Verbeet, perfecting a system of total control.

Starting the article with a detailed description of rules about child-safe lighters that need to be tested but can never be completely safe anyway, and end with a suggestion that it might be a good idea to keep lighters away from children, the authors go on with other well-meaning and completely unnecessary, indeed, frequently counterproductive regulations.

Their repetition of how well-meaning all those people in Brussels are reminds one and, this being a German newspaper, probably is meant to remind one of Mark Antony’s speech in “Julius Caesar” in which he mentions repeatedly that the conspirators who had just murdered Caesar are “all honourable men” while turning the people of Rome against them. The result, as I recall, is a bloody carnage that includes the murder of Cinna the poet, torn “for his bad verses”.

Anyway, back to EU regulations.

According to the EU Commission's new "Consumer Protection Strategy Paper," the EU must demonstrate to Europe's 493 million consumers that it has their best interests in mind. This new zeal has led to many a bizarre or even completely nonsensical EU directive, even though many of the new regulations are fundamentally justified. But when taken together, they create new control mechanisms on top of old ones already notorious for their intrusiveness and inefficiency.

Inevitably the question of food, health and hygiene comes up.

The EU's self-proclaimed protectors of the general health and well-being are especially interested in food hygiene regulations. Their goal is to fully regulate the production, transport and sale of food products from the producer to the consumer's plate. Once again, the underlying concept makes perfect sense, and yet the new rules, while failing to prevent spoiled meat scandals or the excessive use of pesticides, have in fact served up all kinds of new absurdities. A Westphalian pig farmer who fattens his animals in his own forest, just as his grandfather did, runs afoul of the law if he allows the pigs' liquid manure to seep straight into the forest soil instead of draining it through standardized concrete pipes.

In some cases the Brussels bureaucrats' zealous rush to implement new standards has cost ordinary citizens their livelihoods. For instance, a regulation that requires all legal cheese production facilities to have running water and electricity spells the end of many Alpine cheeses. The small dairies that traditionally make these cheeses simply cannot afford the investments needed to satisfy the Brussels requirements.

Ah yes, cheese makers and their problems. Been there, done that, though again, as I recall, a good deal of that came from our own officious ministers and regulators.

So, it seems the writers are unhappy. “Are Europeans dim-witted and unable to cope with life?” – they ask somewhat despairingly. The answer in many cases has to be yes but I know what they mean.

By and large, people are capable of working out that it is not such a good idea to leave lighters within reach of children. Equally, it is a rare food producer who actively wants to poison his or her customer. There is a down-side to losing all your customers, one feels.

There is also a description of the role of various lobbying organizations though, obviously, within the framework of a general article. It would appear that German lawyers are questioning the whole notion of continuous and overwhelming protection, raising such notions as individual responsibility:

In truth, even legal experts find the well-intentioned flood of regulatory fervor overwhelming. Last year the president of Germany's Federal Constitutional Court, Hans-Jürgen Papier, warned "against the constantly increasing regulation of virtually all areas of society and the economy, as well as large segments of private life."The "expanded apparatus of the Brussels EU Commission" contributes to the fact "that there is now a layer of overregulation that exceeds the reasonable scope of the law," says Papier, the chief justice of Germany's highest court. For this reason, says Papier, the legal system runs the risk "of suffocating the individual responsibility and self-determination it is in fact intended to guarantee." Torsten Stein, a European legal expert at Saarland University, warns that one day EU citizens will become aware "that, long after the end of absolute rulers, a new authority has established itself that once again claims the authority to decide what is good and what is bad for subjects."

It would be something of a historic irony – I do like that expression – if the supposedly individualistic British continued to call on the government to do this, that and the other while the Germans rebelled in the name of individual rights and responsibilities.

Read the whole article.
Posted by Helen at 21:20