A blue nettle with yellow stars 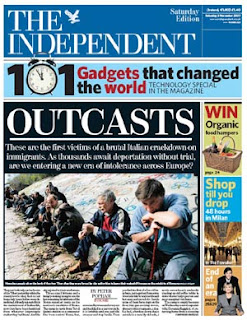 Belatedly, the MSM is catching up with the Italian immigrant story – The Telegraph running its first piece on a sequence of events that started last Wednesday. The Daily Mail is also in full flow, with a fairly full report, but pride of place must go to The Independent, which has been quicker off the mark. It gives the issue full front-page treatment (pictured).

Predictably, given its "liberal" left-wing bias, the Independent sides with the Romanians, declaring: "Outcasts: Italy turns on its immigrants in wake of a murder," describing them as, "…the first victims of a brutal Italian crackdown on immigrants." It adds, "As thousands await deportation without trial, are we entering a new era of intolerance across Europe?", then dwelling on the misery of these incommers, remarking that, "the city rejoiced at their misfortune".

Crucially, it notes that, in response to the murder which triggered the current outrage, "Within hours Italy was doing what millions of people around Europe – whipped up by populist politicians and a xenophobic media – would like to see their own governments doing: taking quick, dramatic and draconian action to teach the immigrants a lesson they won't forget."

One of those "populist" politicians is clearly the prefect of Rome, Carlo Mosca, who has responded to the new law, declaring: "I shall sign the first expulsion orders straightaway. A hard line is needed because, faced with animals, the only way to react is with maximum severity." This, The Guardian noted, "did not prompt controversy".

The truth of the Independent's charge is reflected in the wearily predictable (but heavily moderated) "man in pub" comments in The Daily Mail, to the effect that, "if Italy can do this, why can't we?".

The point is, of course, that Italy cannot do this – not legally within the framework of EU law – especially as the nature of the Italian action becomes clearer. Says the Independent:

A new law on security has been creeping through parliament: one of its central provisions is that foreigners belonging to EU countries and resident in Italy can be expelled on the orders of local prefects if they are a threat to "public security". No trial is necessary. On Wednesday night, at the urging of Walter Veltroni, the Mayor of Rome and leader of a new centrist party, the Democratic Party, that provision was extracted from the law, quickly redrafted as a "decree-law", a sort of diktat, and signed by the President overnight. From being the sluggard of the EU, suddenly Italy was in the vanguard. "First 5,000 expulsions to go ahead," promised La Repubblica newspaper. 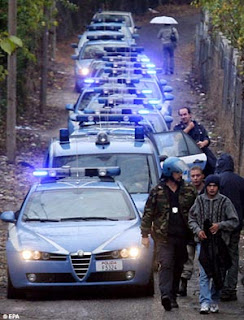 It helps, of course, that Italy is "blessed" with a mega-mouth Italian commissioner, Franco Frattini, who runs the "justice, freedom and security" portfolio. He gives the impression, as the Telegraph puts it, that, "The move appeared to have the blessing of the European Union." There also seems to be conditional, if guarded approval from unnamed "officials in Brussels", cited by the Mail saying that "Italy appeared to be working within the directive of EU legislation …".

However, a cautionary note comes from Nello Rossi, the head of Italy's National Magistrates Association, (cited by The Telegraph). He says that each expulsion would have to be justified, and that "there cannot be mass indiscriminate expulsions", adding, "The new law does not appear to conform to our own constitution or to the European law which recognises the right of European citizens to circulate freely and stay within the territory of any member state."

Therein lies the truth and, as the Independent indicates, there is already reaction building up against Italy’s new law, reinforced by an authored commentary from Simona Farcas, the president of Italy-Romania.

Further, despite apparent support for the Italian moves from Romanian prime minister, Calin Popescu Tariceanu, speaking on Italian state television, in an interview with Radio Romania, he tells his domestic audience:

We cannot prevent our citizens from going abroad, but I do think that the situation could be helped we people like these could get a job, an intensive programme of attracting them to get some job and not do such things. On our part we are doing our best to do what we can, but we cannot bring such people back to Romania, it is not our job nor are we supported to do that.

Inevitably, faced with the prospect of thousands of his countrymen being forcibly returned by the Italian authorities, a backlash is inevitable and the prospect of a legal challenge becomes a certainty.

All this presents the commission with huge problems. Firstly, it must rein in commissioner Fratini, but it will have to do so in a way that avoids him losing too much "face". On the other hand, as "guardian of the treaties", it must also hold the line. If Italy is seen to be defying EU law and embarking on mass expulsions of EU citizens, the pressure for similar actions by the governments of other member states will become irresistible. 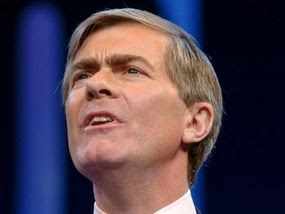 Already, we are seeing this possibility rehearsed by another of the media's favourite "renta-quote" politicians, Patrick Mercer, who tells the Daily Express: "I can think of few benefits of belonging to the EU but one might be seeing how Italians cope with people who pose a danger. They seem to be dealing with them robustly. Why can't we?"

This sort of comment makes it a British problem, for the "man in pub" reaction – demanding similar action in Britain – will be equally intense, more so if, as expected, the economic situation deteriorates and we see a significant increase in unemployment.

Even now the news that more than half of the 2.7 million new jobs created since Labour came to power have gone to immigrants has fuelled the smouldering resentment at the influx of immigrants. The spectre of lengthening dole queues consisting predominantly of displaced British workers, contrasted with images of immigrants gainfully employed, can do nothing but fan the flames. Incomers naturally become the scapegoats for policy failures, even though they are by no means responsible for them.

Understanding, however, is not helped by an extraordinarily stupid and ill-informed op-ed by Charles Moore in The Telegraph. With the typical, myopic tribalism of his breed, he seeks to attribute the problems of "mass immigration" to the Labour government. There is only a passing mention of the European Union and but one reference to the Human Rights Act.

Similar bovine stupidity is expressed by the Telegraph leader which pathetically warbles that, "Immigration must be managed properly". It then tells us that we should try to control the influx, "through embarkation controls" and a "distinction between work permits and residence rights". It also tells us that we should withdraw from "UN and EU conventions that prohibit the deportation of illegal immigrants".

Offering thus a solution equivalent to sticking a finger in a dyke that has just been hit with a dambuster bomb, the paper shows no comprehension whatsoever of the degree to which our immigration policy has been handed to Brussels.

Such ostrich-like behaviour is not going to go anywhere near solving a problem that, as the Italian experience demonstrates, can only intensify. While politicians are only timidly dipping their toes in the immigration debate, public sentiment is way ahead of them.

Sooner or later, they are going to have to come to terms with the singular fact that the nettle that they are failing to grasp is coloured blue, with a yellow ring of stars. And, if they do not, others will.