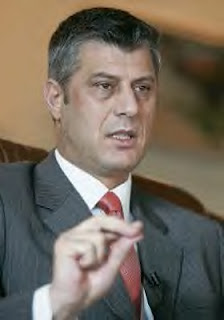 Meanwhile, the pro-independence party of Hashim Thaci, the Democratic Party of Kosovo seems to have gained more votes than any other, 34 per cent according to unofficial results.

Reports say that the election went reasonably well except for one problem – low turn-out. In fact, only 43 per cent bothered to vote.

The Kosovan Serbs boycotted the election, a matter for sorrowful head-shaking on the part of Javier Solana and Olli Rehn, the Enlargement Commissar.

In fact, the low turn-out was not just because of the Serbs. Many of the Albanian Kosovars decided that they really wanted none of the above.

Analysts said the absenteeism was in effect a strong protest vote against the Democratic League of Kosovo (LDK), in power in Kosovo since its 1998-1999 war between the ethnic Albanian rebels and Serbian forces.

The low turnout slashed support for the LDK, the party of late independence icon Ibrahim Rugova, credited with only 22 percent of the vote compared with 45 percent in elections just three years previously.

In addition, the electorate was disenchanted with politicians' corruption through misuse of public funds, said the head of the European Movement in Kosovo, a non-governmental organisation.

The Chief Common Foreign Policy Spokesman (until the Constitutional Reform Lisbon Treaty goes through) found this rather worrisome as well:

However, Solana sounded a less positive note about the voting figures in Kosovo’s parliamentary and municipal elections.

“I am concerned about the low turnout, which reflects the population’s widespread dissatisfaction with the political elite”, the EU’s foreign policy chief said in a written statement.

Well, indeed, that is what happens when the population is widely dissatisfied with the political elite. When you think about it and remember the last few elections for the Toy Parliament, 43 per cent is actually quite high.