Is he listening to himself? 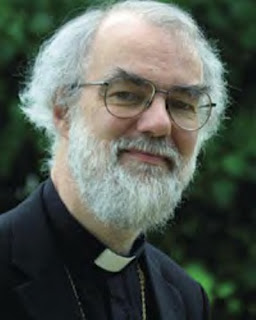 We used to run a series called “Are they listening to themselves?” but the Archbishop of Canterbury is out on his own in his category. Nobody comes anywhere near him in this respect.

Today’s news is that he has given an interview to a Muslim lifestyle magazine, Emel, in which he ranted against the United States and the vacuity of Western lifestyle.

Not that it is all that surprising. Archbishop Williams, after all, is the man who went on a tour of Sudan, organized by its government and bleated about Guantánamo. Not a word about Darfur or, for that matter, the treatment of Christians in Sudan.

He is the man who voted in the Synod for disinvestment in Israel, the only Middle Eastern country that is a functioning democracy, then tried to explain it all away to the Chief Rabbi.

To my knowledge, he has never said a word about the terrible persecution and violence Christians suffer from in Islamic countries and areas like the West Bank. This is routinely highlighted by Anglican Friends of Israel and while one accepts that Archbishop Williams is not one of those Friends, it might be quite a sound idea for him to read the website and comment on some of the more egregious cases. He is after all a major Christian leader in the world.

Still, this time he has surpassed himself if the media reports are accurate and, so far, the Archbishop has not resorted to his usual whining of how he had been misunderstood.

It would appear that he has been supported by some MPs in his criticism of the United States, though the some boils down to Sir Gerald Kauffman and with very many caveats, Vincent Cable. Even Denis McShane said that

Other than on Iraq, most nations welcome America’s continuing engagement in defending freedom and sustaining democracy.

All very well to say that “our modern Western definition of humanity is clearly not working very well” but could we have some particulars? Without coming down on any side myself, I would like to hear what the Archbishop thinks about abortion and whether he agrees with those who argue for the importance of family upbringing.

What does he think about crime and the way our society treats criminals and, indeed, those who have mental problems? Oh and here is a goody: what does his vaporousness think about terrorism? Is it anybody’s fault and if so, whose?

We know what he thinks about terrorist attacks on Israel – they are Israel’s fault and the country has no right to defend itself.

He also condemned Israel’s security fence, which it says is to protect Israelis from terror attacks. “Whatever justification is given for the existence of the wall, the human cost is colossal,” he said. He insisted on referring to it as a wall, saying: “I haven’t seen very many fences of that size and thickness.”

Whatever the size and thickness, it is a fence. Has his vaporousness seen any fences around labour camps in China, another country he has recently visited without bothering to mention how Christians are treated there? Incidentally, has the Archbishop referred to the story that the Chinese authorities will not allow athletes to take the Bible to next year’s Olympic Games? The Chinese authorities have denied the story but it would be nice to have a strongly worded statement on the subject from the leader of the world’s Anglicans.

Come to think of it, what of the human cost of the various Palestinian governments and their constant fighting with each other?

Apparently, he did criticize Islamic societies but very mildly. Big of him. But then, presumably, the Muslim style magazine (no jokes please about tasteful pictures of girls having acid thrown into their faces if they refuse to wear the veil) would not publish the interview.

What has caused some excitement is his bloviating lordship’s accusation that the American empire is not a patch on the British one in its heyday. I must say, things have come to a pretty pass if lefties of Dr Williams’s variety start praising the British Empire to all and sundry. [More here.]

It is one thing to take over a territory and then pour energy and resources into administering it and normalising it. Rightly or wrongly, that’s what the British Empire did – in India, for example. It is another thing to go in on the assumption that a quick burst of violent action will somehow clear the decks and that you can move on and other people will put it back together – Iraq, for example.

As it happens, I am a fan of the British Empire, which achieved many good things in the world but there is no denying it, there were episodes of quick bursts of violent action and moving on. In fact, the Americans have not moved on in Iraq and it is the likes of Dr Williams who are calling on them to do so. (Just as his predecessors eventually achieved America’s catastrophic withdrawal from Vietnam. Ooops, another country where Christians have not been treated well but you would never know from the Archbishop.)

Quite clearly, his vaporousness is incapable of grasping the links between Britain and America and the ideas that govern (or in the case of Britain, used to govern) those countries. 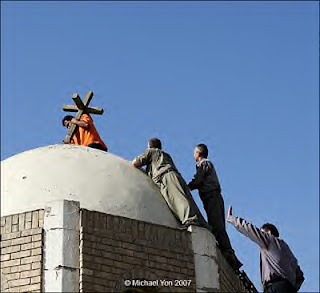 Well, one can go on about the Archbishop of Canterbury and his skewed view of the world, his ability to give comfort to our enemies and his inability to understand and value freedom. One can enumerate, as I have done a bit, all the times he refused to give comfort and support to people, particularly Christians who live in fear of their lives but continue to affirm their faith. I wonder, however, if his bloviating lordship might like to contemplate the picture above from Iraq, taken by the invaluable Michael Yon and reproduced with his permission, of a cross being placed on a church by Iraqis, both Muslim and Christian.

Here is his caption:

Thanks and Praise: I photographed men and women, both Christians and Muslims, placing a cross atop the St. John’s Church in Baghdad. They had taken the cross from storage and a man washed it before carrying it up to the dome.

Would that have been possible without American activity in that country? And could we see the Archbishop of Canterbury rejoicing in an event that is of some significance to everyone in the Middle East but particularly to Christians?
Posted by Helen at 00:21