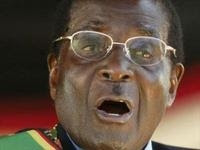 Goodness what a mess and how avoidable it all was. The European Union, in pursuit of those nebulous “European values” has always made rather an issue of not allowing President Robert Mugabe, his family and henchmen to the EU. He shall not set his foot on this soil, was proclaimed triumphantly.

Then came the Portuguese Presidency with its grandiose plans to reformulate the EU-African relationship (though, curiously enough, there has been no mention of reforming trade policies, abolishing aid that is wasted or stolen and discarding the common fisheries policy). To which end all African leaders were invited to a summit in Lisbon next month and they all accepted with one proviso – their mate Robert had to be there as well (and, presumably, his entourage that might even be larger that that of Hizonner the Mayor of LondON).

President Mugabe has now formally accepted the invitation that the Portuguese Presidency issued earlier this month. Prime Minister Gordon Brown has announced that he will not spend any time in the same room as the butcher of Zimbabwe (not quite the word he used but close) and there is a flap going on.

This could have been avoided with great ease, as we have said a number of times before. As soon as the African leaders started threatening non-attendance if their Zimbabwean playmate was not there, the Presidency, if it had any sense of honour and decency (OK, OK, that was a joke) should have agreed and said that in those unfortunate circumstances the EU-African Summit will be cancelled and the money thus saved will go to a good cause, namely the European taxpayer.

Instead, there is a flap. I am repeating myself here, but there really is no other way of describing it.

"There is no kind of diplomatic embarrassment. We deeply regret that what is being done to innovate and truly transform the relationship between Europe and Africa is being dampened by some obsession by the media around the president of Zimbabwe," Joao Cravinho, Portuguese secretary of state for foreign affairs, told TSF radio in Lisbon.

"When the history of the summit in Lisbon is made this issue, which currently attracts a lot of attention, will only be mentioned as a footnote," he added.

It doesn’t sound to me like Señhor Cravinho has been briefed particularly well. Perhaps, he would like to borrow some of our own chaps and chapesses from the FCO. They can write a much better spiel.

So far, only the Czech Prime Minister, Mirek Topolanek, has followed Brown’s example. What are those Scandinavians, so obsessed with human rights and international gestures usually, thinking of? That if you wait long enough the problem will simply disappear?

Meanwhile an element of farce has entered the affair.

Senegalese President Abdoulaye Wade will fly to Zimbabwe on Wednesday for talks with President Robert Mugabe in an attempt to resolve a row between Harare and London which threatens to derail a EU-Africa summit next month.

The President’s spokesperson, who appears to have had a different briefing from the one issued to the Portuguese secretary of state for foreign affairs, thinks that in order to make the Summit work, everybody has to be there.

However, there seems to be no real idea as to what the Summit is intended to achieve. If it carries on in the same way, it will provide us all with some entertainment. What it will not do is help Africa and its people but that is not the major aim of all these discussions.
Posted by Helen at 18:30