Why is it humiliating? 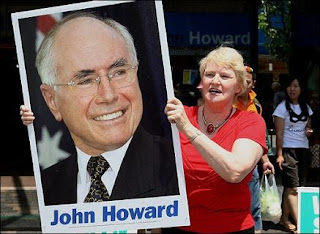 It seems that John Howard, the second longest serving Prime Minister of Australia has lost the election. Final results are not yet in but

Official figures from the Australian Electoral Commission showed Labor well ahead with more than 60 percent of the ballots counted. An Australian Broadcasting Corp. analysis showed that Labor would get at least 81 places in the 150-seat lower house of Parliament — a clear majority.

There will be much discussion in the days to come but I suspect that as in Britain so in Australia - people get rather bored with long-serving governments.

If Kevin Rudd really does change the Howard policy on close alliance with the United States, particularly in Iraq and on man-made-climate-change (and just because he says so, it is not a given) then his victory might be bad news for the Anglosphere.

Then again, there has been little talk of changing Australian policy on the need for immigrants to accept national identity.

All of that is in the future. What I want to know is why should Howard's defeat be described as "humiliating" by journalists? He has carried off four victories and been the second longest serving Prime Minister of the country. He has undoubtedly left his mark on that country's politics and Kevin Rudd will find it difficult to erase that.

Now he has lost an election. It is still possible that he might lose his own seat as the postal votes are not in yet. That will be somewhat humiliating though, again, there must have been some changes in electoral boundaries. As for the rest, it is merely that the whirligig of time and democratic process has come round again.

I predict there will be enormous amounts of gloating in the media because a staunch Anglospherist and ally of the United States has lost, as predicted, his fifth election.
Posted by Helen at 12:11