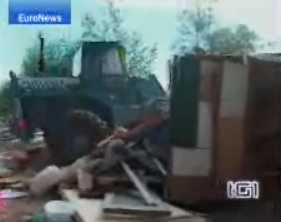 Continuing to watch the unfolding situation in Rome – not least because the British MSM seems entirely uninterested in the drama, or its implications (correction: now in the Daily Mail and The Daily Telegraph!) - we learn from AP that, as of yesterday, dozens of mainly Romanian immigrants were fleeing their shantytown homes on the outskirts, as earth moving equipment was drafted in by the authorities to flatten their accommodation.

AP paints a picture of immigrants "carrying their belongings in bundles and plastic bags, and sometimes atop bicycles," leaving a camp on the northern edges of the capital, fearing that they would be rounded up and expelled.

The Romanian prime minister, Calin Popescu Tariceanu, we are told, has intervened, speaking on Italian state television to support Rome's "crackdown". Violent Romanians "will be sent back home without hesitation," he is reported to have said.

The AP report adds that, although the free movement of EU citizens within the 27 member nations is a cornerstone of EU policy, countries still have the right to keep dangerous people out.

From all reports, however, this "crackdown" still seems to be of dubious legality, entirely contrary to EU law. One again, we must refer to EU Directive 2004/38/EC, which states that, "Measures taken on grounds of public policy or public security shall comply with the principle of proportionality and shall be based exclusively on the personal conduct of the individual concerned."

Any process which involves a mass expulsion, especially one based solely on nationality, and without taking account of "the personal conduct of the individual concerned," is clearly out of order.

Furthermore, the Directive requires a judicial hearing for all those whom the authorities wish to expel, and until an appeal has been heard, expulsion orders must be suspended, except "where the expulsion decision is based on imperative grounds of public security". But since that exception must be based on "the personal conduct of the individual concerned," any idea of mass expulsions seems to be ruled out, as is any expulsion on precautionary grounds.

We should not be surprised that the media are so ignorant of the detail of EU law, but it is quite extraordinary that, as what appears to be a major challenge to EU law is in progress – in one of the founding member states of the EU – that no one in the media can be bothered to find out.