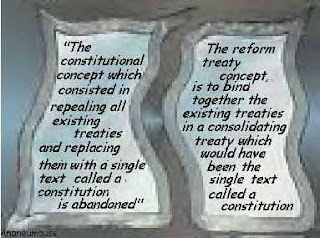 Amazingly, it was at the end of October that Valéry Giscard d'Estaing told Le Monde that the Lisbon treaty and the Constitution were effectively the same, but it is only today – nearly two weeks later, and on a Saturday morning – that the BBC Today programme takes up the story.

Ed Stourton interviews the man whom he describes as the "Godfather" of the constitution:

VGD: Let us be very precise about it. You know, the text in Lisbon was written in a different way than the text called Constitution for Europe. When we wrote it, the Constitution, we wrote it directly, article one, article two, article three and so on. What they did in Lisbon is a different work. They took our text, they started from our text and they tries to introduce the different articles or notions into the existing treaties.

So of course the approach is materially and intellectually different, but the substance, they started taking as a basis our test. It's just another presentation and combination of presentation but the text is word to word the same one. If you attach importance to the fact that they are the existing treaties, that is true. But if you take the substance, the nine or ten proposals that were in our text, they are in exactly in the same wording in the new presentation.

ES: If that is the case, if the substance is the same as the constitution…

VGD: Well, the question of the way to ratify a treaty is an open question. In France, normally to ratify a treaty, it's through parliament. And its up to the president of the republic to decide if he wants or judges that it's better to go through a referendum. So the normal process for France is parliamentary process. Since the Lisbon treaty is legally a new one, even if the substance is absolutely similar, we can took, the government can took the process, the parliamentary process, without having legal problems.

ES: Well that may be the technical position but it's politically dishonest, isn't it?

VGD: Well, it's not so clear either. I try to be sincere with you. When the French people voted "no" at the referendum, they did not vote on articles, they did not even vote on our proposals. They voted against the political power in place, the people in charge, at that moment. So you cannot tell, say, strictly speaking that they approved or disapproved certain part of the text. They did not in fact, because they did not voted on the text.

ES: Alright, let's deal with the argument in this country, where perhaps it's a little bit clearer because the British people were promised by the government in their last election manifesto that if the constitution went through there would be a referendum. And the point of that was it felt that the constitution contained a real change in Britain's relationship with Europe. Now you've just told us that in substance that what was the constitution has gone through so the logic must be that there should be a referendum.

VGD: Well, there shouldn't be by my evaluation a debate on wording. The new Lisbon treaty do not present itself as a constitution. [It] is an improvement of the existing treaties. For the thought of mythical case of having a constitution or not is not the problem of today. Because you voted already several treaties like the treaty of Nice, the treaty of Amsterdam. They were changing the old treaties and that is what the Lisbon treaty will do. So the question if it's sort of obligation to go to referendum doesn't seem to be obvious. You have a choice and of course it's a political choice. And this political choice belongs to the British authorities and people.

ES: Well, I suspect, you'll forgive me if I say this, but I suspect a lot of people listening to what you've just said will regard it is typical of the kind of dishonesty they see in the way that Europe's political leaders operate because you conceded that in political terms, in terms of substance, what we have before us is what you originally designed. But you've taken refuge in the technicalities of it to escape the possibility that the British people, or the French people come to that, should be able to pass judgement on it.

VGD: You cannot argue with me about it because that is not my proposal. My proposal was the former text. The Lisbon text is the product of government. It's not the product of the European convention. We produced the former Constitutional treaty. And then the government conference. The governments decided that they preferred to take the substance out of this treaty and to send it back to the existing treaties. It is their choice and so they have to answer themselves to the question you press. It's not to me to answer that.

The response of Giscard to the French referendum is quite bizarre. The people weren't voting for (or against) the treaty, they were voting against the people in power. Therefore, the "no" vote can be ignored.

As to the question of the British referendum, "this political choice belongs to the British authorities and people." Only the people, somehow, don't seem to have a choice. That's democracy for you!