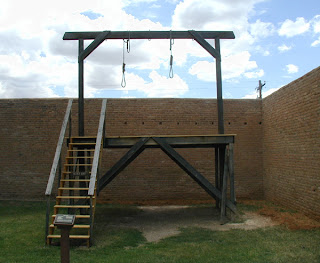 On Monday the foreign ministers of the EU member states will meet to discuss various items, foremost of which will be a call from Italy's foreign minister for all EU members to push for a worldwide moratorium on the death penalty.

This is at the behest of prime minister Prodi, who made such a song and dance about the 30 December execution of Saddam Hussein. Foreign minister Massimo D'Alema will urge EU countries at a to agree on a common strategy to help stop executions around the world.

At the same meeting, we are told the ministers will express strong concern about the "intolerable" situation in Darfur, and denounce air strikes on civilians by Sudanese government.

It is now estimated that at least 200,000 people have been killed and 2.5 million driven from their homes during the four-year-old conflict in Sudan’s remote western regions, although the EU has refused to accept the United States view that this is genocide.

Strangely, therefore, the EU is putting itself in a position where it is calling for an end to the killing of genocidal maniacs but it refusing to call for an end of the genocide in Africa. As always, it is nice to know that it has it priorities right. And our views on its action have not changed.