Now will they do something? 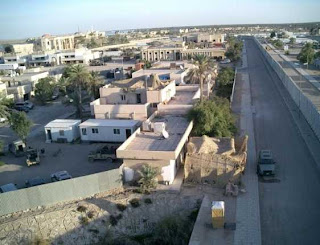 Six British soldiers have been wounded in a series of attacks against Basra Palace camp (pictured), which came under fire last night three times from a mixture of mortars, rockets and small arms. One soldier was said to have been seriously injured in the attacks last night. Five others received lesser injuries.

This is according to The Times and agencies . It comes nearly three months after the Foreign Office was forced to take the humiliating step of evacuating civilian staff from the Consulate, reflecting the inability of the Army to defend a site that includes its main headquarters in southern Iraq. 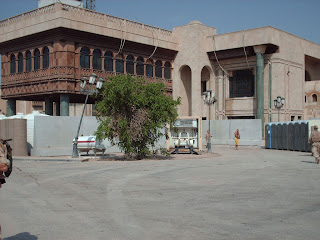 Progressively, from 2003 when the Army took over the site, all they have done is add to the fortifications, giving the impression of a base under siege - which is precisely what it is, sending a signal to the insugents and the people of Basra that the British and coalition forces are not in control.

As a result, the passive defences have done absolutely nothing to stop the continued barrage of attacks which are reported to be occurring daily with, we are told, increasing accuracy. 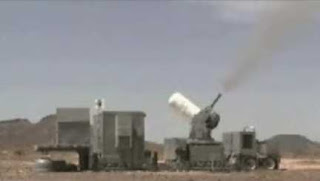 This blog has questioned, again and again, the reluctance of the Army to take adequate counter-measures against rocket and mortar attacks and, in December, Tory back-bencher Ann Winterton asked the secretary of state for defence whether his Department had evaluated the existing Counter Battery Radar to be adapted to provide targeting data for the Phalanx C-RAM Anti Mortar system – one of the key defence weapons systems (pictured).

Initial assessments of the Phalanx C-RAM Anti Mortar system indicate that it is not appropriate for our current requirements, but we keep the operational situation under review. We have not therefore considered the adaptation of the Counter Battery Radar to provide targeting data for this system. We provide layered protection for British bases in Iraq and Afghanistan through a range of force protection methods. 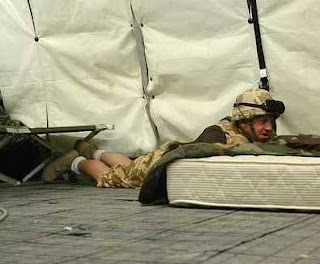 So, unlike US and now Canadian bases, which are protected by this technology, it is "not appropriate" for British bases. We have "layered protection". We can hide under the beds, under the tables, in the bunkers…

With six troops having been injured, however, this should be a wake-up call for the British government. Not a few expert commentators have been warning that, as the date for a British retreat withdrawal comes closer, insurgent activity could well increase. It is also feared that, as the additional troops in the US sector begin to exert their effect in president Bush's "surge", hostile action may be displaced into the less protected British sector.

It may be only a matter of time, therefore, before a mortar bomb or rocket finds a really vulnerable target, like a mess hall where troops are gathering for a meal, or one of the dormitory tents which house 20 or more troops. There are no excuses and further delay is intolerable. The technology exists to safeguard our troops and only the lack of political will can prevent the necessary safeguards being put in place.

And it would, of course, help if the Conservatives had a policy on this issue. Where art thou Gerald?