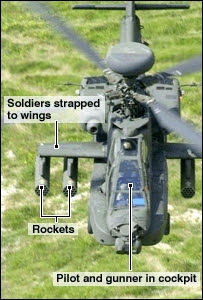 What was intended to be my last word on last Monday's attempted rescue using Apache helicopters is posted here, complete with pics of one of the actual helicopters used.

It is a testament to how the story is developing, however, that the BBC has now obtained from the MoD video coverage of the flight of one of the Apaches, which has been run on BBC News 24, with the recording available on the BBC website

Despite the stupid graphic (what is it about commissioning editors?), we actually get a sensible comment from Paul Adams, saying:

This episode raises questions. The military lacks the sort of light helicopters that would normally be used for this sort of work. It'll be another seven years before something suitable is available.

The message is gradually beginning to filter out and, with luck, we might be seeing some detail emerge. It is odd, though, how it should be the BBC which picks up the thread, when all the newspapers seem to have missed it.