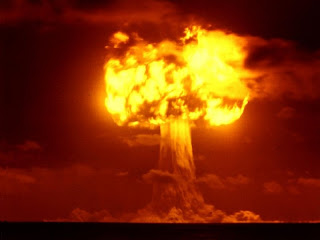 For anyone who thought we might have been exaggerating about the emphasis given by some to global warming, we now lean that scientist Stephen Hawking has described climate change as a greater threat to the planet than terrorism.

Hawking made the remarks as other prominent scientists prepared to push the giant hand of its Doomsday Clock - a symbol of the risk of atomic cataclysm - closer to midnight.

These scientists - the Board of Directors of the Bulletin of the Atomic Scientists, in consultation with a Board of Sponsors that includes 18 Nobel laureates – examined, as they had done in the past, human-made threats to civilization.

But this time they concluded that the dangers posed by climate change are nearly as dire as those posed by nuclear weapons. The effects may be less dramatic in the short term than the destruction that could be wrought by nuclear explosions, they say, but over the next three to four decades climate change could cause drastic harm to the habitats upon which human societies depend for survival. 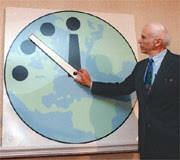 This "deteriorating state of global affairs" led the Board of Directors to move the minute hand of the "Doomsday Clock" from seven to five minutes to midnight.

The move will mark the fourth time since the end of the Cold War that the clock has ticked forward. Hawking justified the move by declaring that "as citizens of the world, we have a duty to alert the public to the unnecessary risks that we live with every day."

I have to say though that we do agree with Hawking's warning… "we have a duty to alert the public to the unnecessary risks…". Accordingly, we do hereby declare Stephen Hawking and his fellow travellers as "unnecessary risks".