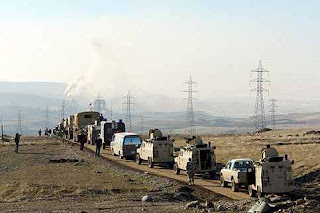 The picture shows a military convoy of Iraqi army Kurdish troops heading from its base in the northern Kurdish city of Sulaymaniyah towards Baghdad. This is the 3rd Brigade, 4th Division – note the Polish-built Dzik-3 APCs that we have seen before, part of the new equipment which is filtering into a newly invigorated army, which is being seen more and more on the streets.

The fact that the Kurds are moving in on Baghdad is also significant. Generally, they have tended to stand separate from the travails in the capital and, with additional US convoys pouring over the border of Kuwait into Iraq (pictured below), Bush's "surge" strategy is beginning to take shape. 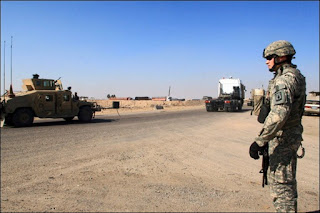 Meanwhile, the Telegraph's Thomas Harding seems to be just waking up to the idea that "Iran is taking control of Basra by stealth". Well I never! But for the Telegraph, how would we ever have known that?

Not for Harding the general media, commentators, local news agencies and other sources that have been saying this for months and years. This self-important correspondent has "Iraqi intelligence sources" which have "disclosed to The Daily Telegraph" that Iran plans to move in once the British troops move out, backing the local militias in taking over over the political and security structures, undoing four years of work that has cost 129 British lives and billions of pounds.

Only the Iraqi army stands in the way of the murderous militias, writes Harding. And all the evidence we have seen so far is that, when faced with the militias, it is not up to the job, without very close support from the British Army. If, unlike the Americans, numbers are to be reduced and the rest of our troops are forced to skulk in their barracks, "on standby", then the outcome looks rather predictable. 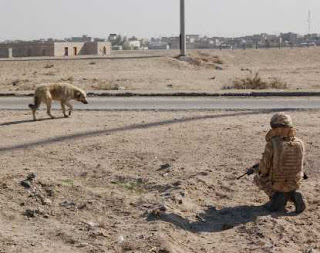 On the other hand, if a weakened and ill-equipped British Army does step in, it can expect to be caught in the cross-fire and take significant casualties – as it has every time it has sought to take a proactive stance in southern Iraq. Without the numbers and the equipment to limit casualties, one can then expect local commanders to resort to casualty avoidance measures, reducing the British presence – and effectiveness – on the streets.

Thus writes Harding: "When it withdraws from the city the Army can only watch and hope, but it appears there are greater powers at work. Iran has always known Britain's presence was transient and is well prepared for the departure – and for the next round of almost inevitable conflict." This may be a statement of the "bleedin' obvious", but it nevertheless sums up the situation which, as Iraqi and American troops pour into Baghdad, points up the contrast and the dereliction of the British government's approach - to say nothing of the total retreat of the Conservative Party.