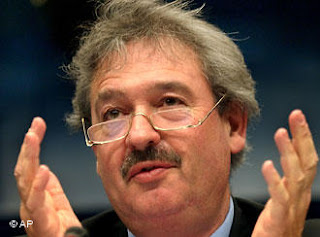 We talk a lot about the two countries which voted against the European Constitution but not that many words are spoken about the two that had a referendum and voted yes: Spain and Luxembourg. (The other 16 who have approved have done so without any popular approval, and quite right, too. You never know what people might say.)

The two countries decided to host two meetings organized by the "friends of the constitution", a select group. One meeting has been held in Madrid but the second one, scheduled for February in Luxembourg, has, as EUObserver reports, been cancelled.

Jean Asselborn, the Foreign Minister, has announced that it was decided not to hold the meeting because Luxembourg and the "friends of the constitution" did not want to seem to be in any way unhelpful to the Presidency.

Germany or, to be quite precise, the German government is known to be unhappy at the idea of a large meeting about the constitution in February just before a statement is to be signed, rejoicing in the fiftieth anniversary of the European project.

The second meeting, which would bring the pro-constitution camp and the constitution sceptics together, would also encroach on what Germany sees as the prime task of its presidency - to bridge the divide between the two camps and seek a new consensus on an EU treaty.

Meanwhile, Mr Asselborn said that the meeting had also been cancelled because of resistance by France and the Netherlands, which would be forced at the Luxembourg conference to define their exact position on the constitution at an early stage.

Let's all keep quiet and maybe the problem will just go away.

Alas, the problems are already multiplying. The Madrid meeting was first seen as just a get-together for supporters of the constitution though Spain and Luxembourg emphatically said that this was not so. To prove their good intention they sent out invitations to all the capitals – the 18 who might be called the sheep can participate while the goats who have not yet ratified the document can send observers.

Reaction has been mixed.

Ireland and Portugal, which have not ratified the treaty but strongly support it, will send observers to the meeting.

Germany as EU chair also chose to be represented as an observer only - sending its ambassador in Madrid to take notes of the meeting.

The Netherlands appears to have politely declined the invitation to also send an observer, with Mr Bot saying that "we will not go to Madrid."

It is not clear whether Britain sent observers or not. Possibly the FCO is still wondering what that letter was about.