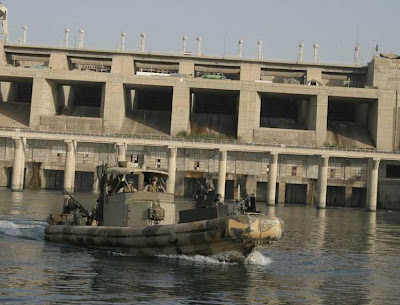 For those who missed it, here is the explanation for the gratuitous "toy" pic.

This one is a Small Unit Riverine Craft (SURC) from the USMC Dam Security Unit, against the backdrop of the Haditha Dam on the Euphrates River in the Al Anbar province, Iraq. The photograph was taken on 30 April 2006 by Cpl. Justin L. Schaeffer, USMC.

The pic is posted at 800 pixels so, to get the full effect, mouse-click anywhere on the face of the picture.

Meanwhile, Strategy Page has done a compilation labelled: "Top ten myths of the Iraqi war". I particularly like number five:

The Invasion Was a Failure: Saddam's police state was overthrown and a democracy established, which was the objective of the operation. Peace did not ensue because Saddam's supporters, the Sunni Arab minority, were not willing to deal with majority rule, and war crimes trials. A terror campaign followed. Few expected the Sunni Arabs to be so stupid. There's a lesson to be learned there.

Since you cannot negotiate with evil, as long as these people do what they do, they must be killed. Despite the moonbat wingeing, the US and Iraqi forces are doing a good job lately.