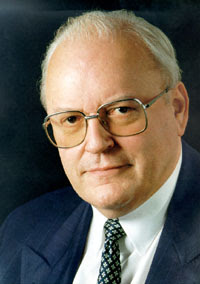 An obscure German politician, of whom only a handful of people in the UK can have heard, is hardly going to set the world on fire when he tells us that democracy is in danger because of the direction in which the European Union is developing.

However, he is Roman Herzog, former judge and German president between 1994 and 1999, and he says it in the newspaper Welt am Sonntag today, where he writes, "EU policies suffer to an alarming degree from a lack of democracy and a de facto suspension of the separation of powers."

What is more, Herzog has a co-author, the director of the Centre for European Policy (CEP) in Freiburg, who goes by the name of Lueder Gerken. And among their criticisms is that the German parliament was not involved in European Union legislation as required by the German constitution.

They also say the European Union is undergoing "creeping centralization" and acquiring further powers, "often without due justification". The EU constitution comes in for criticism as well, as reinforcing the centralising tendency.

Merkel apart, I suspect there are a large number of German politicians who agree with Herzog. And when enough start saying the same things, we may start seeing cracks appearing in the edifice.