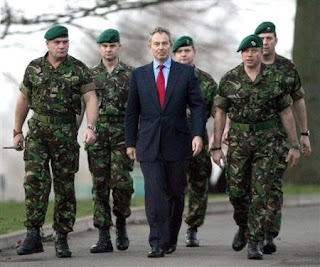 It has been a constant refrain of this blog that we need a public debate on the role of our armed forces, with my colleague setting the tone by suggesting (nay, asserting) that we as a nation no longer have the stomach to be a military power and should disband our forces.

Not wishing this to be true (but accepting that it might) I had hoped that a grown-up Conservative opposition would lead such a debate and that the issues would be properly aired – even if I might have been less than satisfied with the outcome.

But, instead of a debate, we have one of the Boy King's loathsome "commissions" and for a shadow defence secretary Liam Fox, both of which has ensured that the issues have not been intelligently discussed – not least it seems because Fox seems to have no feeling for or understanding of defence issues.

But, in politics as in nature, vacuums are unstable things that are prone to be filled. In the absence of any sentient contribution from the Boy and his lacklustre chums, the gap is being filled by none other than our own prime minister (for the time being) Tony Blair who today spoke to the subject in Plymouth. There, at one of Britain's premier naval bases (for the time being) he opened precisely the debate we have been calling for.

According to the BBC website , Blair tells us that Britain must decide now whether it wants to be a major defence power in the future. Needless to say, he defends his own policy of intervention in countries such as Iraq and Afghanistan but he also wants a debate on whether the UK should continue to send troops to trouble spots after he quits.

This is a bit rich coming as it does the day after the US announced it was sending more than 20,000 extra troops to Iraq and rumours abound that the UK is poised to withdraw over 3,000 troops from southern Iraq.

But what is fascinating is the sea-change in Blair's outlook. At the early stages of his prime ministerial career, he saw Britain's influence in the world in terms of membership of the European Union. To that effect – with enthusiastic support of his then defence minister Geoff Hoon – he was prepared to submerge the British military in the European defence identity.

Now, however, he is arguing that if Britain wants a leading presence on the world stage, it means continuing to send troops into dangerous places far away - with (and largely without) the involvement of the EU. In a interview with a local television programme, he declared, "There is a global terrorism that we face … I think it's right for Britain, alongside our allies, to be in Iraq and Afghanistan. But it is a big decision to decide to be in that game still."

The crucial issue for the Eurosceptic community is that the allies with whom we are working are not the European Union. They are Nato, the United States, countries like Pakistan – with whom we share the vital task of defeating the Taliban – and Anglospheric countries like Canada and Australia.

In short, the best way for the UK to maintain its semi-detached relationship with the core EU countries such as France and Germany – and ward off encroaching political integration - is to remain immersed in fighting the "war on terror", from which the EU powers have largely opted out.

This being the case, it can be no surprise that the most strident critics of the Iraq war are the Europhile Lib-Dems, supported in the Tory ranks by such arch Europhiles as Ken Clarke. Likewise, with what are clearly emergent Europhile tendencies, it is entirely in character for the Boy King to go soft on the war and to support a policy of rapid disengagement. Equally, the Tory hierarchy are not opposed in principle to greater military "co-operation" with the EU.

The trouble is that there is not only a political divide between the European and the US-led approach, but a growing schism in military philosophies – a divide between conventional "warfighting" and counterinsurgency operations.

Between the two, the Army – in particular – sees the wizz-bang, shoot-em-up warfighting, with its tanks, artillery and other toys as "proper" soldiering. It hates counter-insurgency and treats it as an aberration, hence its reluctance to gear up for it and to develop appropriate and effective tactics. It wants to get it over and done with so that it can get back to its traditional role of breaking things and killing people – preferably "real" soldiers who have the decency to use green (or sand) painted toys and wear uniforms.

Perversely, it is the "soft power" European Union which offers the military the best prospect of equipping and maintaining a modern "warfighting" army, in its grandiose plans for the European Rapid Reaction Force (ERRF). Because the ERRF is a theoretical construct, unhampered by having to be structured and equipped to deal with a real enemy in a known theatre, military planners can indulge in their flights of fancy.

Actively supported by the major equipment manufacturers, who are salivating at the thought of major European programmes, they are focusing on the high-tech end of warfare, developing things like Future Rapid Effects System (FRES). These have no relationship to the conditions in real-life theatres where there are actual wars going on. But they are comfortingly expensive and complicated, and will provide for many industrial jobs and shareholder profits.

Although fighting an insurgency, requires often fairly straightforward (and cheap) equipment - £250,000 for an RG-31 or equivalent as opposed to £8-10 million for a single FRES medium-weight wheeled armoured vehicle – the Army is not really interested in the quantity and suitability of its kit. It will happily discard that which does not fit with its own image of what its role should be, in favour of less capable equipment which accords with that image.

Thus, the debate is not actually about whether we should fight the war on terror but whether we should continue so doing or pull out in order to pursue the more acceptable - to some - programme of European defence integration. But, because the dreaded "E-word" is never mentioned, we have a wholly distorted and unreal debate, with the real issues being avoided and the parties indulging in proxy arguments. 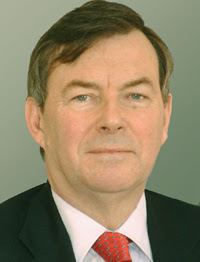 On the one side, we have Europhile Liberal Democrat peer Lord Garden (illustrated), a former assistant chief of defence staff, who agrees that the UK should pay much more of its national income towards defence. He is then supported by Air Chief Marshall Sir Michael Graydon (retd), who also says that "We mustn't fall into the trap of becoming a peace-keeping militia." He declares that, "An ability to conduct full-scale military operations is the foundation for successful peace-making and peace-keeping."

Both of them – representative of their two factions – are thus opposed to deeper involvement in Iraq but for entirely different reasons. Nevertheless, they come together with a common objective which makes them temporary allies.

What they need to understand though is that, since the Korean War in the 1950s, it is the conventional shooting war which has been the aberration. From Aden to Iraq via Malaysia, counter-insurgency has been the norm. Therefore, if we are to have a place in the councils of the world - which really mean anything - then we are going to have to ensure, whether they like it or not, that our armed forces are properly equipped and structured to deal with what is also called asymmetric warfare. And that, coincidentally, is the best way to break the grip of the EU - by developing a world view that does not accord with that of the "little Europeans".

More specifically, with current defence expenditure, we have the finance to equip our armed forces for conventional warfighting or for counter-insurgency, but not both. Clearly, the Europhiles would prefer the former - as that takes us in the direction of the EU. Also, the hierarchies of the armed forces desperately want to keep a warfighting capability and, forced to make a choice, would dispense with their counter-insurgeny roles. (As for the Tories, they do not seem even to be in the debate as they seem largely unaware of what is going on.)

Whatever the merit of retaining a significant conventional warfighting role, it has to be said that the urgent need for the here and now is to improve our counter-insurgency capability. And, by happy coincidence, promoting the development of that capability is the best way of scuppering the ERRF.

From the Eurosceptic stance, therefore, Blair is suddenly the ally - as are those who support the continuation of the war in Iraq. The Lib-Dims (the Conservatives) and the military – each for their different reasons – are the opposition. But, with the real issues ill-defined, the real opposition is ignorance. That is where we are going to have to focus, bringing it home to people that there is a real world out there. The EU is not part of it and, if we wish to be part of the real world, we cannot be part of the EU.