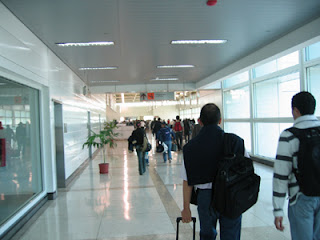 First, our political classes impose a Treaty which has profound implications on all of us, for generations to come. Amongst other things, it creates a right of "freedom of establishment" which permits the citizen of any member state freely to set up residence in another state. This is the "Europe without borders".

For sure, we get a referendum, but that was in 1975 – two years after our masters decided we should join the then EEC. That means that no one currently under the age of 50 got a vote, and there was never another, not even when the membership of nine – as it was when we joined - increased to 25 and then, on 1st January, to 27.

Thus it is that we are compelled to permit entry to the citizens of 26 other member states. The number that has taken advantage of this must be well into the millions by now. Perforce, it includes a goodly number of criminals who have upped sticks to pastures new, and fresh victims. And, in the absence of a system to ensure otherwise, and without compulsion and sanctions, there is no way the police can identify these people, or get access to their criminal records.

Thus it is that a judge, in desperation calls for an EU criminal records system.

This was Judge Stephen Robbins, who made the call after "serious difficulties" had been experienced in getting accurate information on the previous crimes of foreign offenders, saying that it was a "matter of pubic concern" that the courts in England were having these problems.

Trying to check on the previous convictions of two Lithuanians convicted of gun-running had shown how "very difficult it was to glean details, let alone precise details" from their home country, Robbins said. Despite all the efforts that had been made, it had not been possible to find out details of the criminal careers of the Lithuanians.

Nor had the police had not been able to determine whether a 10-year sentence that one of the men had received had been imposed for rape. Apart from confirming that he and his co-defendant had been in trouble before, a prosecution office in Lithuania had been able to provide nothing more than a useless list of penal codes, some of which were outdated.

The judge, who jailed three men at Southwark Crown Court in London last week for a total of 32 years, has deferred a decision on whether they should be allowed to remain in Britain amid concerns over "double jeopardy" issues.

Orestas Bubliauskas, 34, from Chigwell, Essex, and Andrius Gurskas, 26, of no fixed address, were each sentenced to 11 years, while Darius Stankunas, 34, who lived in Sheffield, was sentenced to 10 years.

They used a car fuel tank to smuggle an "assassin's armoury" of revolvers, silencers and ammunition from Lithuania, an EU member since May 2004. The Russian Baikal pistols, 20 rounds of ammunition and a silencer were then sold to gangs in Britain for as little as £1,500.

So it is that, in order to protect British citizens and to ensure that justice is done, the call goes out for a better system – and EU system. How logical that is and how unreasonable it would be to oppose it. And the EU commission would be delighted to implement a system. In the fullness of time, member state governments will agree to one.

What we are seeing, therefore, is a system of integration which is incomplete and throws up all sorts of anomalies and inconsistencies – which can only be resolved by more integration. And through this means, step-by-step, as the problems are resolved, the political classes will get their full political integration, which they could not have been able to achieve in one hit.

That is called engrenage. Translated literally, it means "gearing". A more practical definition is "salami slicing". And we're looking at another example of it.