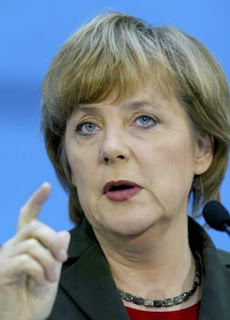 Spare a thought for the incoming "president" of the European Union. What can she say that is of the slightest novelty or interest to anybody, including herself?

Chancellor Angela Merkel laid out her country's plans for the next six months in her speech in the European Parliament. But a curious coincidence there was a great similarity between these plans and those laid out in July by the Finnish presidency and last January by whoever was taking over then.

Merkel began her speech by stressing diversity as a core European value, saying the EU had to be vigorous in defending its freedoms.

"Tolerance," Merkel said in one of the speech's central lines, "is the soul of Europe." Among the liberties in need of protection, she cited freedom to voice opinions that upset others, freedom to believe or not to believe in religion and freedom of artistic expression.

"Europe," she said, "should never have the slightest understanding for intolerance, for violence by right-or left-wing extremists or violence carried out in the name of a religion."

"Tolerance," she added, "digs its own grave, if it does not defend itself against intolerance."

The one thing that is slightly unusual is Merkel’s stress on left-wing intolerance as well as the right-wing variety. That should go down reasonably well with the East Europeans. After all, Merkel herself is from East Germany. Then again, even a cursory reading of European history would indicate that tolerance may not actually be the continent's soul or, at least, not much of the time.

Bureaucracy will have to be reformed and decreased – an aim emphasised by incoming presidencies for decades and ignored by outgoing ones.

There is another reference for the need to work more closely with the United States, which is really stating the obvious but not, perhaps, to the average European politico. Once again the subject of a free trade area between the United States and the European Union has been raised, as being of benefit to all. Well, I am not sure about that. It would be a benefit to some European countries but not to others. And, while we are on the subject, if a free trade area across the Atlantic is a good idea, why is it not a good idea across the European Continent (or other parts of the world)?

Of course, relations are not just about trade and the European Parliament needs its pound of flesh (so to speak).

Merkel said the EU needed to cooperate more with the US on the issue of climate change in the efforts to achieve a global environmental treaty by the year 2012.

"Access to energy and protecting the climate," she said, "are two challenges affecting all of humanity in our age."

Well, again, I am not so sure. Is terrorism not a problem that affects us all just a teensy-weensy bit? Presumably, having mentioned violence in the name of religion under the subject of intolerance (so hated by all Europeans) she does not feel she has to refer to the “t” word.

Nor is it entirely clear to me how she intends to “protect the climate”. Even by the standards of the sloppy talking that “global warming” and “climate change” invokes, this is a lulu. As for access to energy, Germany had better make some decisions about her ever-growing reliance on the less than reliable Russian energy producers.

So we come to the most important part, the European constitution, which, according to Chancellor Merkel, has to be solved soon or an important opportunity will be missed.

Merkel called for the issue to be resolved before the next EU parliamentary elections in 2009, warning that failure to do so would be "a historic mistake." She also stressed the need for the EU to have a foreign minister.

"The time for deliberation is over," she said. "We have to reach new decisions."

Who is this we, paleface? In at least two countries the people had reached a decision. Which part of no does Chancellor Merkel not understand? In some other countries, such as Denmark, Ireland and Britain, the people have not yet been asked. What happens if they say no, as well? How is Chancellor Merkel going to reach her decisions, particularly on that foreign minister, whose job remains unclear as there is still no agreed EU foreign policy, despite endless discussions on the subject.

But, as my colleague pointed out some time ago, there is a certain problem with that constitution in Germany. The Karlsruhe court, asked to look at its legality, announced that it would not rule until the other member states have made their decisions because they do not want to influence the political process in them, though how is the political process in Ireland any business of the German constitutional court is not entirely clear.

It seems those new decisions might have to wait on some more deliberations.