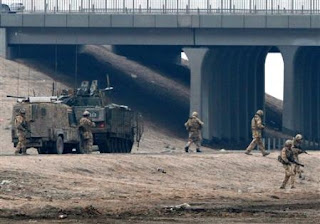 According to the MoD website another British soldier has been killed in Basra, succumbing to a roadside bomb. Four other soldiers were injured, during the incident, one of them very seriously.

We are informed that the soldiers were attacked while taking part in a routine patrol on the outskirts of the northern part of Basrah City, near the districts of Al Hadi and Al Jezaizah, when a suspected roadside bomb detonated. 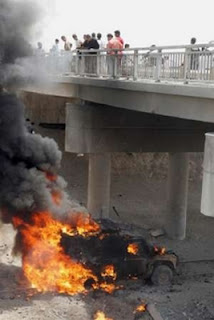 We may be mistaken but, from the photograph, the type of ambush location looks rather familiar - this photograph (right) showing the site of an attack on a Land Rover patrol in May 2006.

This time, however, the casualties were part of a Warrior armoured personnel carrier patrol but, says the MoD, it is unclear whether they were dismounted at the time of the attack.

This brings the number of service personnel killed in Iraq since the beginning of the invasion in 2003 to 130 – considerably less than the 3,000 plus lost by the US forces – who lost another 20 troops yesterday, including 13 lost when a Black Hawk helicopter crashed, killing all 13 on board. If it seems excessive to give equal or greater prominence to the single loss sustained by the British (and those injured), in the grisly arithmetic of war where the US has more than 20 times more troops deployed than the British, proportionately, the loss rates are roughly equivalent.

But, as we have remarked before, southern Iraq is supposed to be a quiet sector, without the sectarian fighting which is so damaging the central provinces. That the British casualty rate should be so high, therefore, is somewhat remarkable.