We are at serious risk of losing in Afghanistan said Sir John Stanley yesterday. In the days when Conservative MPs had some standing, the views of the Hon. Member for Tonbridge and Malling might have had an impact, uttered as they were during a debate in Westminster Hall.

But all Sir John got was a short squib in The Daily Mail and the BBC website, the latter retailing foreign office minister Geoff Hoon’s response, he claiming to the incredulity of the few who were listening, that the mission in Afghanistan "is going as planned".

Nevertheless, just because he is a Tory MP – and largely ignored in the wider world - does not necessarily mean he is wrong, especially as he used to be Minister of State for the Armed Forces. And said Sir John:

The essence of the security problem for us was shown very well in the Dispatches programme on Channel 4 last night. Although I noted that the Government sought to dismiss the programme as being based on out-of-date film, I thought that it brought home extremely vividly, and with absolute accuracy, the essence of the security problem, which is that NATO forces are too thinly spread in the areas of Afghanistan where combat intensity is highest. That presents our forces with real operational problems. It makes them constantly vulnerable to the possibility of finding themselves significantly outnumbered. It makes them dependent on calling in air strikes, which carry with them the attendant risk of civilian casualties and the destruction of civilians’ homes, with all the political damage that that does to our long-term objectives of winning hearts and minds in Afghanistan. The fact that we are so thinly stretched in the southern part of the country tends to make many Afghan civilians there significantly more alarmed and open to coercion by the Taliban than are reassured by our very limited presence.

He went on to add:

The fundamental duty of any British Government is to ensure that our forces are adequately equipped for the task that they are being asked to undertake. Patently, that has not been the case and still is not the case in Afghanistan, and certainly is not in Iraq. We all know that casualties have been incurred, and lives lost, as a result of insufficient body armour. We know of deep concerns among our servicemen and women about the adequacy of their armoured vehicles. We also know—it was borne out graphically in the film on television last night—about the serious inadequacy in the amount of helicopter support available in Afghanistan. 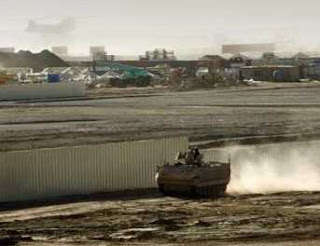 Sir John was very much backed up by Tobias Ellwood, who reminded us all that he had been calling for some time for Warrior vehicles to be sent.

Interestingly, AP published a photograph of an "armoured vehicle" patrolling the perimeter of Camp Bastion. It is difficult to say precisely what it is but it looks suspiciously like an up-armoured FV432, the so-called "Bulldog".* Not exactly a Warrior, that would nevertheless be a distinct improvement on an unarmoured WIMIK Land Rover.

Strangely, the MoD makes no mention of this but, with such indictments of the government, it cannot have been entirely a coincidence that the MoD "spin machine" was at full stretch yesterday, one early victim being The Scotsman. Instead of reporting the debate, it published an outrageous "puff" for the Royal Marines' BVs10 Viking, under the headline, "'Supervehicle' saves Marines' lives". Unable to see past the MoD spin, the paper even cites an unnamed "British forces hardware expert" who tells us "considerably more" troops would have died if it had not been for the new vehicle.” How so very comforting for the MoD.

It is easy to understand why some MPs are disillusioned about their calling, but one really does wonder why the media have to be so crap at doing their jobs.

*Subsequent analysis shows it to be a Dutch M-113.