How is the new boy doing? 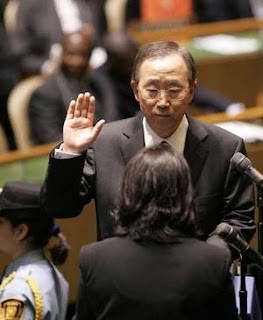 According to RIA Novosti, the new SecGen of the United Nations, Ban Ki-Moon has put on Kofi Annan’s “heavy crown”. Well, indeed. Many of our readers will recall a certain Henry IV in Shakespeare’s plays of that name bemoaning the fact that “uneasy lies the head that wears the crown”.

What the same readers might not know (though some others will) is that there is a very similar line in Pushkin’s historical play “Boris Godunov”. The latter, having been elected by the nobles to be tsar carries a heavy load of guilt because of the supposed murder of Ivan IV’s baby son, Dmitry (a dubious theory, historically speaking).

Thus, Boris not only sees visions of bloodied babies but cries out about the heaviness of the crown, that is “the cap of Monomakh”. Vladimir Monomakh was a mediaeval Great Prince of Rus, regarded as the progenitor of all subsequent ones. The crown of the Tsars of Muscovy and then of Russia is known as the cap of Monomakh. (Oh do keep up, will you.)

Well, what are we to call the crown Ban Ki-Moon has inherited, particularly as he did not have his predecessor murdered and, as far as we know, is not guilty of infanticide? The Coronet of Peace? Lacks something in realism? The Cap of Irresponsibility? Getting there.

Going on with the Novosti report, it would appear that the new SecGen has already found out that actually life may not be all that easy at the top of that particular greasy pole. Called upon by the High Panjandrum of the EU’s foreign policy, Javier Solana to send UN troops into Somalia (why now, one wonders, as if one didn’t know), Ban Ki-Moon has had to admit that actually he does not have the troops to send in. And, of course, we do not talk of the behaviour of those troops in the places they have been sent to.

All in all, the new boy has wasted no time in proving his anti-Americanism. While his first statement was more or less acceptable in that he went against UN “policy” and refused to denounce the execution of that martyr and mass murderer Saddam Hussein, things have been going downhill since.

He, too, has expressed his disquiet about the American attacks on Al-Qaeda in Somalia:

Notwithstanding the motives for this reported military action, the Secretary-General is concerned about the new dimension this kind of action could introduce to the conflict and the possible escalation of hostilities that may result," said Moon’s spokesperson Michele Montas during daily press briefing on Wednesday.

Possible escalation? Does this mean that the Somalian conflict was somehow dying down? Or that the Al-Qaeda honchos were interested in dampening that conflict? Or that the Islamists’ sharia law was somehow popular among anyone except western commentators who can always flee to the comforts of their home?

Biased BBC, incidentally, quotes evidence to show that the Beeb’s chief correspondent in Somalia is “a businessman supportive of the Islamic Courts, who is seen as partisan by opponents of the Courts”. What a surprise, eh? That is possibly why the BBC can put up articles about fear stalking the streets of Mogadishu, somehow omitting to mention the fear that may have stalked those streets before. Au contraire.

Such random attacks have created fear among the civilians who had enjoyed relative safety under the Islamists' six-month rule.

I must admit that even my jaw dropped when I read that, used though I am to the BBC’s little peculiarities. The same article says:

The advice from one and all is to get Ethiopian troops to withdraw from the country and replace them with African peacekeepers.

I assume this does not mean that the BBC does not realize that Ethiopians are Africans, too, but that they are talking about the African Union peacekeepers. One wonders who those advice-givers are and whether they recall the AU’s complete and utter failure in Darfur and Sudan in general.

So, Ban Ki-Moon is shaping up as another one of those hand-wringing weepers who hate those who try to do anything to solve the big problems more than those who cause those problems. No surprises there.

Meanwhile Claudia Rossett, already on the trail, has found an interesting little tit-bit about the new SecGen’s appointments. One of them is the Tanzanian Foreign Minister, Asha-Rose Migiro, who is to become Bam Ki-Moon’s deputy. Her qualifications? She has recently chaired a conference for the Great Lakes region of Africa.

That’s the official story, anyway. The less official one is that there were various deals done before the election of the new SecGen and Tanzania, for one, has demanded some payment for the vote – as well as the money South Korea has promised to disburse in largesse to kleptocratic rulers …. ooops, sorry, foreign aid.

Ms Rossett who is roundly abused in the comments section by some employee of the UN Foundation, also quotes an Iranian news item, which came to her via Russia and is not, therefore, absolutely reliable. According to this, Tanzania’s Foreign Minister Migiro has lined up with the Iranian Mullahs and supports the country’s right to have “peaceful” nuclear energy.

The Islamic Republic of Iran is ready to cooperate in various fields as investment, export of technical and engineering services to Tanzania, he [Iranian ambassador to Tanzania] underlined.

The Tanzanian energy minister, for his part, expressed satisfaction with the current level of relations with Iran and voiced his country's readiness to negotiate with Iranian companies active in construction of power plants.

Referring to the activities of Iran's Construction Jihad Bureau in Tanzania in the past, he welcomed reopening of the office in the country.

Well, never mind. The official line as expressed by that employee of the UN Foundation is that the appointment of Ms Migiro “can be considered a boon to the prospect of UN reform”. I can see that one being trotted out for all sorts of misdemeanours.