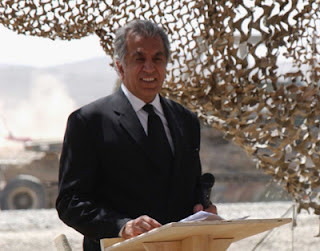 The BBC conveys the report that the US ambassador to Iraq, Zalmay Khalilzad (pictured), has spoken of differences between the US and Britain over future strategy for Iraq.

The Blair government is planning a partial withdrawal of British forces from Basra this year but Khalilzad has broken ranks and revealed that the US would prefer UK forces to remain at their current levels in southern Iraq.

Interviewed on BBC Radio 4's World Tonight new programme, though, shadow secretary of state William Hague disagreed. The troops should be withdrawn, he said, "as we are near the limit of what can be achieved."

Interviewer Robin Lustig then chipped in, suggesting that, if it was "so quiet in southern Iraq", perhaps it was a case of the Americans expecting us to come and give them a hand in Baghdad. Amazingly, Hague did not disagree with this premise. Instead he declared that the troops were needed more urgently in Afghanistan.

Are these people mad? Surely they cannot be that ignorant of what is going on in Basra?