Of course, we believe in free speech but ... 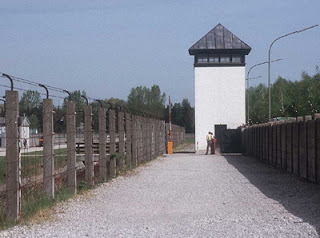 The move to make Holocaust denying illegal across the EU seems to have acquired legs, with the Commission supporting the German proposal and the egregious Justice Commissar Franco Frattini (he, who got his job because the original Italian candidate Buttiglioni was a devout and practising Catholic) announced somewhat pompously that he "very much welcomed and fully supported" these proposals.

I shall not bother to rehearse all the arguments against the ban, which have nothing to do with the horrible aspect of the event and of the need to know about it and to study it (though there are other things in history to study as well).

It is, however, gag-making to hear this sort of commentary:

While freedom of expression is part of Europe's values and traditions, its democratic societies also allowed to fight racist speech through penal law, the commissioner added.

Those European values and traditions (that, of course, include Nazism and the Holocaust as well) seem to be infinitely flexible. What Commissar Frattini should be dealing with is the fully acknowledged growth in anti-Semitic attacks across the whole of western Europe in the last few years. Most of these member states, including Italy, routinely post police guard outside synagogues because they are afraid of attacks that come from one or two barely acknowledged directions.

Compared to that, the denial of something that happened some decades ago, a denial that is, moreover, not taken particularly seriously by any respectable historian or commentator, is hardly of paramount importance. Is this another effort on the part of all our lords and masters to go for displacement activity rather than trying to deal with existing and growing problems?

As we have already said on this blog, should such a ban be proposed for legislation in the United Kingdom, we shall start campaigning for legislation that would make the denial of Communist crimes illegal. Alas, we have not enough space in courts or prisons to accommodate all those who have been and still are indulging in this activity.