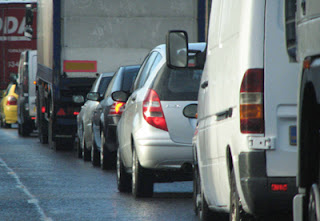 The Telegraph's transport correspondent, David Millward, has finally woken up to the fact that "Brussels has demanded that all member state road pricing schemes should not only be harmonised, but be capable of linking with the EU's £2.3 billion Galileo satellite." He writes, in today's newspaper:

Brussels's insistence that road-pricing technology works with Galileo was seen by critics as a way of ensuring the project recoups income from licence fees paid by tolling authorities. Such demands will apply to all road pricing and toll systems introduced since the turn of the year. Existing schemes could be forced to use the same technology.

In addition Brussels expects the onboard units, which should be harmonised across the EU, will also be capable of enforcing a wide range of road pricing schemes — from London's congestion charge to a German motorway tolling scheme and even, where possible, time spent in a garage or car park.

Of course, readers of the Sunday Telegraph could have seen this in the Booker column in June 2005, we wrote about it in the blog in the same month, but also as early as March 2005 and again the same month.

But we are talking about Directive 2004/52/EC of 29 April 2004, on the interoperability of electronic road toll systems within the Community, so I suppose it is a little harsh to expect the Telegraph to notice it in less than 2½ years.

But isn't it so good to see professionals at work!