An inseparable part of European integration 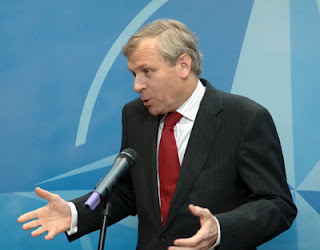 Speaking today to an audience of 150 EU officials who met to discuss European defence policies at a conference hosted by the German Foreign Ministry, NATO Secretary General Jaap de Hoop Scheffer told them:

How do NATO-EU relations stand? Let me answer that by means of a little anecdote. A few weeks ago, one of my staff told me he had been invited to a conference on "frozen conflicts". And then he added with a smile: "Of course it's about the Caucasus, not about NATO-EU relations!"

It would undoubtedly be going too far to describe NATO-EU relations as a "frozen conflict". At least the logic of a European Security and Defence Policy is not in dispute today. The ESDP has meanwhile become an inseparable part of European integration.

Er… "the European Security and Defence Policy has … become an inseparable part of European integration."