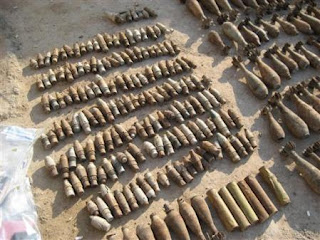 Reports are coming in of a British dawn raid on properties in Az Zubayr, near Basra, where ammunition, light rockets, bomb-making paraphernalia, radio equipment and timer units were discovered in a house.

The raid was hastily organised and carried out by 250 soldiers from 1 Yorkshire Battlegroup, "acting on intelligence". After the raid on the house, 500 mortar rounds were seized from a compound where troops had earlier spotted men transferring weapons into two vehicles. A number of men were also detained.

Without doubt, this is a significant action, not least because it suggests that the British Army is not entirely without friends in the area. While, on this blog, we have tended to emphasise the hardware aspect of fighting an insurgency, the acquisition of local intelligence is just as important as having well-equipped troops. 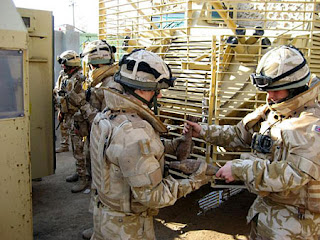 Speaking of which, in the background to this photograph (right) – unless I am very much mistaken – is a Saxon APC, fitted out with slatted armour. This is definitely one we missed as we were under the distinct impression that the vehicle had been withdrawn from Iraq, largely because the thing is perilously instable.

However, this, it seems, is one of a batch of 22 upgraded Saxons, an event not entirely applauded by their users. The addition of more armour and other equipment cannot have helped its stability.

Once again, the contrast with US aspirations is extreme.