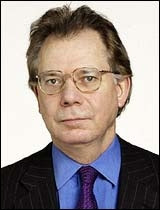 More buzzing in eurosceptic circles: Tim Congdon, the eminent economist, has announced that he will be supporting UKIP if David Cameron remains leader of the Conservative Party.

Whether Professor Congdon actually joins UKIP as George Jones and Brendan Carlin say in today's Daily Telegraph or not, if he continues to write well-argued articles of the kind on today's op-ed page, he will be something of a threat to the Conservatives.

The points that he makes are sensible and well-argued and are not confined exclusively to the issue of the European Union, though Congdon's views on that are well-known.

In the first place, the article raises the standard of individual freedom and responsibility as against paternalistic semi-socialism, as preached by the so-called One Nation Tories, though as it has been pointed out elsewhere, the refusal to contemplate the idea of vouchers in education indicates that the Conservative leadership rather likes the idea of a few children (including their own) getting good education while everyone else is stuck with few prospects of improvement.

These paternalists see their job as being the application of their superior knowledge to state action of some kind. Their political impulses are to tax and spend, to meddle and regulate, and to interfere and control; they welcome state involvement in "socially desirable" activities.

We all know where that sort of paternalism has brought this country: an appalling education system, a health care system that is not nearly good enough for a country as rich as this one, and an economy that favours the parasitic public sector at the expense of the wealth making private one.

Above all, it has destroyed the core ideas of individual freedom and small government that many of us, previous Conservative voters believe in.

Congdon goes on. Like this blog he accepts that what David Cameron says is what he means.

But I think this is unfair and dishonest. Mr Cameron should be taken at his word. When he says he is in favour of "national school-leaver programmes", "social action zones" and suchlike, and when he says that the Tories should become "the champions of social action", he really does mean what he says. Whether his words have any genuine meaning is another topic, but of his sincerity in uttering them there should be no doubt.

On the main issues of the day, all the big parties are now close together. Unless the Tories drop Mr Cameron with all his misguided baggage (a badly rationalised environmentalism, Third World do-goodism, holier-than-thou "social inclusiveness" and the rest), I cannot vote for it. I believe today — as I did in the 1980s — in a small state, low taxes and free trade.

David Cameron and the party under him has a set of woolly-minded ideas that can carry disastrous consequences (just think what that Third World do-goodism has done in the last four decades in Africa).

On top of that, it is unreliable, to put it mildly, on the very important question of the UK's relationship with other European countries and the world. For all of these reasons, he will now support UKIP, who have come up with better policies. What was the reaction of the various Tories and, indeed, readers of the Daily Telegraph?

Many of those responding to Tim Congdon's article seemed unable to understand what actually happened in the eighties and why the Thatcherite shock tactics had had to be adopted. But a number have, rather gloomily, admitted that there was a good deal to be said for Professor Congdon's analysis.

Iain Dale, in his diary, expressed disquiet at the thought of a man of Congdon's calibre leaving the party and, again, several of the responses took that theme up. But, astonishingly enough, there were numerous responses along the lines of "he is past his sell-by date", "he is completely mad", "if he leaves the Conservative Party for UKIP then it is good riddance to bad rubbish", and the old-old theme: "anyone who really wants to achieve withdrawal from the EU or reassertion of free market ideas should vote Conservative as that is the only part who will do this". How they figure that last argument I have never been able to understand.

In other words, many, though not Iain Dale, in and around the Conservative Party are learning nothing. As far as they are concerned it is the solemn duty of everybody who dislikes this government and its policies to vote Tory because that is the only alternative. Sadly, they are not an alternative in any real meaning of the word.

Equally sadly, from their point of view, the electorate is growing more aware of its role in the democratic process. Let me repeat this once again for the benefit of any stray Tory who happens to read this blog: we, the electorate, owe you nothing. You owe us a reason or, preferably, several reasons why we should vote for you. Until you produce those reasons, we shall not do so.

For the benefit of those who tell me that I cannot expect the Conservative Party to have the policies I want, let me reiterate. They cannot expect me to vote for them if they abandon any policy that can be described as being even remotely conservative, such as lower taxation, smaller government, greater encouragement for people to take their own path.

Oddly enough, the ToryBoy blog has decided to ignore the story of Tim Congdon, which is probably just as well, as the comments on it tend to go on and on about the lunacy of UKIPPers, as if that had any relevance.

Instead, there is a piece about satisfaction with David Cameron going up among party members from 68 to 71 percent, not in itself an indicator of anything very important but it sounds reassuring. Curiously, only 19 per cent of those members who bothered to answer the question (for some reason no figures are given, only percentages) think it very likely that Cameron will be Prime Minister after the next election. That is not a particularly high figure from your own supporters, even with the addition of 53 per cent who think it quite likely.

The other posting is the story written by Fraser Nelson in this week's Spectator and quoted in the Daily Telegraph as well. Its purport is that David Cameron and his wife, Samantha, have been fantastically good at raising money.

Instead of the usual £15 million in a non-election year, they have managed to raise £21 million through remarkable fund raising efforts that involved Samantha turning up even when her nanny was ill. (Was there a substitute nanny or did she have to ring round her friends desperately, hoping that someone was free that evening?)

Everyone involved in Tory fundraising offers the same explanation for the new bonanza. "It's entirely down to David. No modern Tory leader has been so deft with the donors," said one fundraiser. "He remembers their names, their wives' names, their business problems, everything." Added to this is the indefinable but unmistakable aura of a winner. When asked what difference this makes, my source tilts his head back and rolls his eyes. "Night and day," he says.

Um, maybe. In the end, the rich man in his castle has only one vote as does the poor man at the gate, whose children get bad education and whose grandmother cannot get her hip replaced in time, not to mention the fact that his small hovel has been broken into three times in the last year with the police doing what is generally known as "sweet f.a.", while his taxes are going up and set to go up even more under a putative Tory government.

Furthermore, it is not all that surprising that the Camerons know how to deal with rich people. Are they not rather well off themselves? Does the fragrant Samantha not work at Smythson's, stationery purveyor to the rich? Has not the less fragrant Boy-King's only non-political job been a corporate affairs directorship with the now defunct Carlton TV, that is schmoozing with the rich and the grand?

The question is what is that £21 million going on. At the end of last year the Conservative Party was supposed to be £35 million in debt. According to Fraser Nelson, all that will be wiped off when they sell that white elephant they still own in Smith Square.

Quite so. But they have not sold the white elephant so, presumably, the £21 million will go towards settling some of the debt and not the putative war chest that should make the Conservative Party the only one able to fight an election in the next six months.

Undoubtedly, the Labour Party and Gordon Brown have problems with raising funds as Fraser Nelson points out. The question is does that matter. There is no particular reason why Brown, even if he does become Prime Minister this year should call an election any earlier than it is absolutely necessary. John Major didn't, James Callaghan didn't, Sir Alec Douglas Home didn't, Harold Macmillan didn't.

The argument that he needs a mandate of his own is fallacious. The British system does not give mandates to individuals, unlike the American presidential one. It is a party that is elected and, like it or not, the Labour party was elected for its third term. Gordon Brown can sit it out to the very end of that term with full constitutional and political propriety. And the Conservative Party members can go on rejoicing in Sam and Dave being able to raise money while more and more people with influence abandon it, not understanding the new caring-sharing, compassionate Conservative Party.

This spring we shall see whether the electorate has any time for that entity. There are local elections coming up in many parts of the country the Conservatives did not do particularly well last time round.
Posted by Helen at 16:06