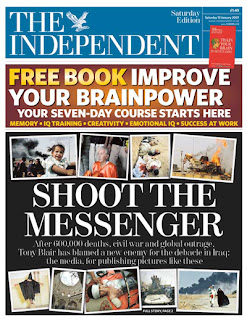 We saw it as a genuine attempt to conduct a debate. But it says something of Independent that Blair's lecture yesterday was seen in a completely different light.

Heading its front-page piece, "Shoot the messenger: PM blames media for anti-war mood", in its eyes, the most significant thing about the lecture was Tony Blair turning the blame for his "disastrous military campaigns" in the Middle East on anti-war dissidents and the media.

Pursuing that message, the newspaper selected two passages from the lecture, quoting them in full. It thus had the prime minister saying:

[Islamic terrorists] have realised two things: the power of terrorism to cause chaos, hinder and displace political progress especially through suicide missions; and the reluctance of Western opinion to countenance long campaigns, especially when the account it receives is via a modern media driven by the impact of pictures.

They now know that if a suicide bomber kills 100 completely innocent people in Baghdad, in defiance of the wishes of the majority of Iraqis who voted for a non-sectarian government, then the image presented to a Western public is as likely to be, more likely to be, one of a failed Western policy, not another outrage against democracy.

It then had Blair acknowledging the public backlash against the Iraq war, citing his comment that: "Public opinion will be divided, feel that the cost is too great, the campaign too long, and be unnerved by the absence of 'victory' in the normal way they would reckon it."

Then we had the paper adding another quote from Blair: "They will be constantly bombarded by the propaganda of the enemy, often quite sympathetically treated by their own media, to the effect that it's really all 'our', that is the West's fault. That, in turn, impacts on the feelings of our armed forces. They want public opinion not just behind them but behind their mission."

Finally, the paper has him warning that the terrorists had learnt how to use the media to undermine public opinion, citing a website, called LiveLeak, showing "gruesome images" of the "reality of war" as the kind of propaganda weapon that was being used by international terrorism.

It is then that the newspaper calls in aid John McDonnell, leader of the left-wing campaign group of Labour MPs, who accuses Blair of "delusional ramblings". Alan Simpson, a leading Labour anti-war MP says: "Tony Blair is whingeing about the hundreds of thousands of people like me who opposed the war on Iraq. He totally fails to realise that soldiers and their families blame him for the reckless way he launched an illegal war with no coherent exit strategy."

The line-up continues with Lib-Dim leader Sir Menzies Campbell, saying: "The Prime Minister does not seem to have learnt the lessons of Iraq. Without United Nations authority the military action was illegal and severely damaged Britain's reputation. This will be the Prime Minister's legacy."

This is seasoned with Air Marshal Sir John Walker, former head of defence intelligence and deputy chairman of the Joint Intelligence Committee, said: He says: "This is politics, not morality. The only reason Mr Blair is saying this now is because he cannot airbrush Iraq out of the news. He is talking about renewing the covenant with the armed forces because they are the ones having to bear the fallout from his mistakes."

His attack on the media was "particularly rich coming from a party which made a such a fetish out of spin," added Sir John.

And, for the coup de grâce, shadow foreign secretary William Hague is enlisted. He says: "This is yet another episode of 'Ten Wasted Years', by Tony Blair. His legacy will be an overstretched army, navy and air force. Our servicemen and women want to know what Tony Blair is going to do about the failure to deliver armoured vehicles to protect troops from roadside bombs in Iraq. They want to know when they will have enough helicopters in Afghanistan and when the Hercules transport fleet will get proper protection."

Nothing, it seems, is too damning for the Independent, which is determined to ram home its message with a leader declaiming: "A mendacious attack by Mr Blair to cover up his fatal misjudgement".

In seeking to blame the media for what he sees as the growing distaste of the British public for war, the Prime Minister is quite simply wrong. If there is, as he suggested, a crisis of confidence in the benefits of military force, it is one that he has brought upon himself.

We are not looking at a general crisis of confidence in the use of British military force, fostered by the sensation-driven modern media. It is a particular crisis of confidence precipitated by the débâcle of Iraq. For all Mr Blair's personal salesmanship at the time - the weapons of mass destruction and all that - this began as a highly unpopular war, and it remains one.

It is astounding that, almost four years on, Mr Blair still fails to understand that the mission is precisely the problem. And his address contained all the old deceits. He conflated, as he habitually does, the interventions in Afghanistan and Iraq, even though the one had UN approval and the other, crucially, did not. He spoke about the qualitatively different threat we face after 9/11, as though the prime reason for invading Iraq was terrorism. And yet again he rejected all suggestion that Britain's presence in Iraq might be a factor in the alienation of young British Muslims.

To this catalogue he has now added the notion that media coverage is turning the British public off the use of "hard" power. The voters may indeed be more wary of military interventions in future. And so may the MPs who represent them. If this is so, however, it will not be because the media have willed it, but because of the fatal misjudgement of a Prime Minister.

It is said of autism that its sufferers lack empathy. They lack the capability to see anything from the point of view of another. And here, The Independent sees in Blair's lecture a direct attack. As it can do no wrong, and has never done wrong Blair must be attacked. The one thing that cannot be allowed, of course, is a debate.

This is truly an autistic response.